The IET Archives recently received a donation comprising a lovely collection of Faraday House certificates and medals that were awarded to Derek Hosking in the early 1950s. The IET Archives already held some Faraday House material, which is perhaps unsurprising given that Faraday House was an electrical engineering training establishment, through which several of the presidents of the Institution of Electrical Engineering (predecessor of the IET) were educated. However, we did not previously hold any examples of either these certificates or the medals in our collections.

In 1909 Dr Russell was appointed Faraday House Principal, and he pioneered the sandwich course whereby a student, following a year of theory, would spend a period in industry to gain experience, before returning to study. This structure of learning and training is evidenced in Derek Hosking’s Faraday House Diploma, shown below, which he received in May 1954. The Diploma shows that Derek started at Faraday House in May 1950, spent time in industry with Holman Brothers from April to December 1951, and then returned to college. Following further study at Faraday House, the Diploma shows Derek undertook further industrial training, this time at English Electric, from September 1953 to May 1954.

The Faraday House Old Student’s Association (FHOSA) closed in 2010, after 105 years in operation, as a consequence of a dwindling membership. The records of FHOSA, covering the period 1939-2009, and which include Faraday House brochures and prospectuses, were given to the IET Archives in 2010 (archive reference NAEST 212).

Derek Hosking and his Certificates/Medals

Derek J E Hosking trained during National Service in the UK as an Air Wireless Operator in the Royal Air Force (RAF) servicing aircraft radio equipment. Whilst with the RAF he worked on the Berlin airlift in Germany (1948-1949). After demobilization he attended Faraday House Engineering College, and after graduation worked for English Electric in various capacities. Derek finished his career in technical administration as a Purchasing Manager at GEC (which had merged with English Electric in 1968) on ‘GEC large machines’. 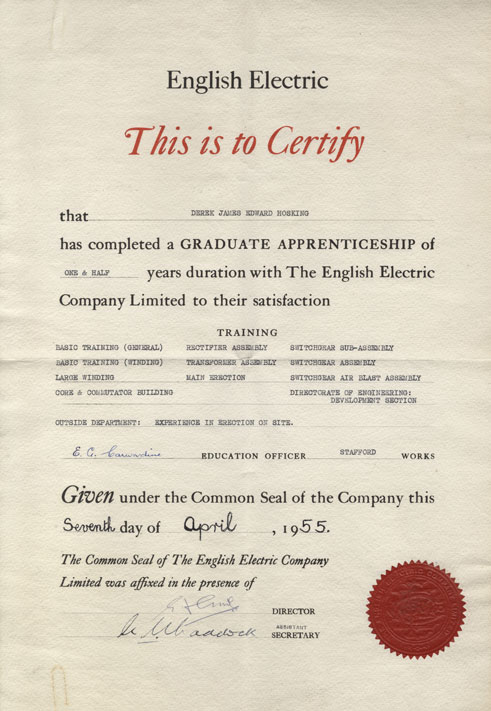 Clearly Derek was academically gifted as is indicated by his Faraday House certificate of results dated September 1953 which shows that Derek achieved the level of first-class (often with distinction) in almost every subject that he sat. It also confirms that he was awarded the college silver medal for coming first in the first year examinations and the college gold medal for coming first in the third year examinations. The following images show both sides of Derek’s Faraday House gold medal.