On the 26th February 1935 a test took place known as ‘The Daventry Experiment’ which is considered to be the precursor of radar in Britain. The test involved the Daventry transmitter of the BBC’s Empire Service and an RAF Heyford bomber which had been assigned to this test by the Royal Aircraft Establishment at Farnborough.

The full story of The Daventry Experiment, written by Brian Austin appears in the February/March 2015 issue (issue no. 153) of the vintage radio enthusiast magazine ‘Radio Bygones’. I am grateful to Brian for allowing me to extract elements from his story.

The plan was for the bomber pilot, Flight Lieutenant R S Blucke to fly to Daventry where, on arrival, Blucke would fire a Verey light to indicate his presence. He would then follow a particular course that would take him along the transmitted beam from the BBC transmitter at an altitude of 6,000 feet. After executing an about turn over some designated marker he would fly back to Daventry while losing altitude to around 1,000 feet. After firing another Verey light he would then return home.

On the ground, near to the village of Weedon, Sir Robert Watson-Watt and A P Rowe from the Air Ministry had joined Arnold Wilkins, a Scientific Officer at the Radio Research Station (RRS) a vastly experienced radio engineer, together with the driver of a converted Morris ex-ambulance that was used as the RRS’s ‘travelling laboratory’. The previous night in preparation for the test, Wilkins and the driver had erected two antennas in a co-operative farmer’s field.

When Blucke’s aircraft appeared on the morning of the 26th February it was initially well to the east of the agreed flight path and no indication of its presence appeared on the cathode ray tube (CRT) screen. However, on its next pass, now closer to the observers, there were definite variations on the CRT screen – described by Wilkins as a ‘rhythmic beating’. This happened again on the following run and Wilkins and Watson-Watt estimated that they were able to observe the Heyford over a distance of about 8 miles.

There was much more to be done before Watson-Watt’s eventual radar system, came into existence but it all began with this Daventry experiment. 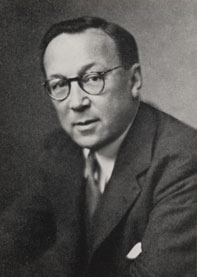 Sir Robert Watson-Watt (1892 – 1973), known as the father of British radar, was celebrated in an IEE History of Technology lecture in February 1993 to mark the centenary of Watson-Watt’s birth. Sir Robert, who had been a member of the IEE, had also been at one time the Chairman of the IEE’s Radio Section. An abstract from that lecture, written by the lecturer, Professor R Hanbury Brown, is set out below;

“Radar was ‘invented’ by Watson-Watt in response to an enquiry about a death-ray. His great achievement was not simply to invent a new gadget; it was to apply this invention to an urgent and historically important problem, the air defence of Great Britain. The original work on RDF, as radar was called, started secretly in 1935 at Orfordness. In 1936 it was moved to a nearby mansion, Bawdsey Manor, where for three years Watson-Watt was the Superintendent and the lecturer was a junior member of the staff. The principal objective to this early work was to develop a chain of radar stations to detect and locate enemy aircraft so that Fighter Command could intercept them. The first, almost disastrous, attempt to demonstrate this use of radar in 1936 is described. In due course a chain of radar stations (CH) was built all-round the coast and proved to be a vital factor in the defence against daytime raids of the Battle of Britain. For defence at night Watson-Watt, perhaps prompted by Sir Henry Tizard, foresaw the need for a radar to be carried in the fighter and in 1936 he started the first and only team in the world working on airborne radar. Radar-equipped night-fighters (AI), guided by ground control radars (GCI), were used effectively against the heavy night raids in 1941. In 1938 Watson-Watt left Bawdsey for the corridors of power in Whitehall. After the war he formed a small firm of scientific consultants and eventually moved to Canada.”

A video version of the lecture was made featuring Professor Brown presenting his lecture material, interspersed with many images and film clips (archive reference IET/SPE/3/2/7/1). It covered Watson-Watts’ history and his involvement with the early days of radar. The video has been digitised and is available to watch via the IET Archives Centre.

Professor Brown worked with Watson-Watt at Bawdsey Manor as a junior member of the team and tells many fond stories about Watson-Watt including his humorous use of unintelligible phrases which Brown used to ‘collect’. The image from the video below shows the Professor mentioning one such phrase which is captioned. Watson-Watt used this phrase when describing his position in the UK to Chiefs-of-Staff in Washington. 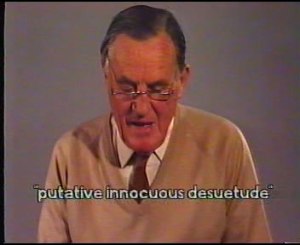 Whilst the IET Archives does not hold a great deal of Watson’s-Watt’s own material there is a curious letter in the IET Archives in the Owen S Puckle collection (NAEST 101) written by Watson-Watt in New York to Puckle – see image below. 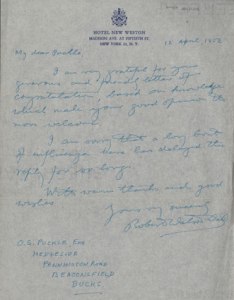 In the letter Sir Robert thanks Puckle for an earlier letter of congratulation (Puckle assisted in the development of the ‘Radio Location’ device). Whilst Sir Robert received many accolades during his lifetime and held many official positions with various institutions it is not clear to what the earlier congratulatory letter refers as most of Sir Robert’s awards came earlier in his life than 1952. Watson Watt did re-marry for the second time in 1952. He married Jean Wilkinson, a Canadian, the widow of historian Professor George M Smith, so perhaps Puckle was referring to Sir Robert’s forthcoming marriage?

For those interested in the history of radar the IET Archives also holds many relevant collections including Sean Swords’ collection of papers on radar (NAEST 144). Sean Swords wrote the ‘Technical History of the Beginnings of RADAR’ in 1986 and this collection comprises correspondence and material used in the production of that book. For example there is a copy of the 1935 letter to H T Tizard from A P Rowe regarding the secret memorandum prepared by Watson-Watt on the possible use of electromagnetic radiation for air defence.