Commemoration of Royal Events in the IET Archives

Today, with the reign of Her Majesty Queen Elizabeth II surpassing the length of Queen Victoria’s reign, we have taken the opportunity to look through the IET Archives collections to see how the IET’s predecessors and other organisations commemorated notable royal events.

Celebration of Royal Events by the Institution of Electrical Engineers

In 1977 on the occasion of Queen Elizabeth’s Silver Jubilee, the IEE’s General Purposes Committee (GPC) was tasked with investigating ways of commemorating the Silver Jubilee. Its recommendation was that three undergraduate scholarships were to be awarded annually to mark the event. The relevant paragraph from the GPC report to the March 1977 IEE Council is shown below.

Later that year, in October 1977, the Chief Executive of the City of Westminster, David Witty, approached the IEE about donating a special seat to commemorate the Jubilee which the Council had available for erection along the Embankment in London. This resulted in the IEE donating two seats and the photograph below shows one of the two seats shortly after installation.

Going a little further back in time on the occasion of the coronation of Elizabeth II in June 1953, the following photograph shows that the IEE chose to mark the event by displaying all the Commonwealth flags on the top of its building at Savoy Place.

Celebration of Royal Events by the Institution of Production Engineers

Another of the IET’s predecessor organisations, the Institution of Production Engineers (IProdE), celebrated royal events in a different manner. The IProdE was formed in 1921 and changed its name to the Institution of Manufacturing Engineers in 1991 shortly before its merger with the IEE also in 1991. The IProdE celebrated both the Coronation of King George VI in 1937 and the Silver Jubilee of Queen Elizabeth II in 1977, by producing illuminated manuscripts for the respective monarchs which also showed the institution’s seal. The IProdE made copies of these congratulatory messages and framed them together with the letters received, in each case from the Home Office, which conveyed their Majesty’s thanks. The framed copies are shown below. 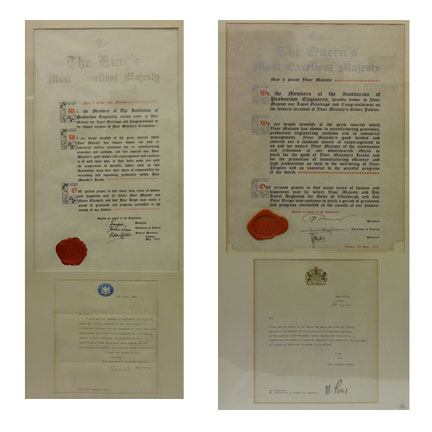 Celebration of Royal Events by the Electrical Association of Women (EAW)

Perhaps the most unusual way that a royal occasion has been celebrated can be seen in the EAW collection held by the IET Archives (archive reference NAEST 93). The EAW chose to celebrate the occasion of the marriage of Princess Elizabeth to Prince Philip in November 1947 by presenting her with an electric blanket – probably still quite a novelty in 1947.

Princess Elizabeth sent a very warm personal letter in response addressed to Dame Caroline Haslett, who was at that time a Director of the EAW. Elizabeth mentions in particular the monogram embroidered by the students of The School of Stitchery and Lace. The EAW arranged for a photograph of the blanket to be mounted together with the reply from Elizabeth and this is shown below.

Today we celebrate this special day in history by highlighting some of the royal correspondence in the IET Archives that reflects the high regard in which the royal family has been and continues to be held.