The IET Archives has an ongoing multi-year project to conserve a collection of pamphlets known as the S P Thompson pamphlets. These pamphlets, covering a multitude of scientific and engineering subjects, came to the Institution of Electrical Engineers along with Silvanus P Thompson’s library of rare books in the first part of the 20th century, several years after S P Thompson’s death in 1916. Not only are many of the pamphlets exceedingly rare, but they often have letters within, as S P Thompson used to insert his correspondence, from leading scientists and engineers of the day, within a relevant pamphlet or book.

As a result of the fragility of these pamphlets and their poor general condition, the IET Archives only begins work on researching, cataloguing, and digitising the pamphlets once they have been conserved and can be handled more easily. The image below shows a volume of unconserved pamphlets which is titled, ‘Electric Discharges I’. 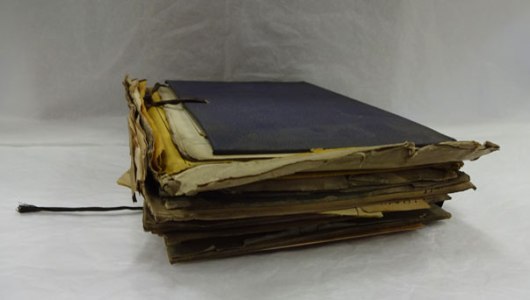 Despite many volumes of pamphlets being conserved over the years since they came into the possession of the IEE, each volume on a specific subject containing around 30 to 50 individual pamphlets, there remain several hundred volumes of unconserved pamphlets still to be worked upon. We usually manage to conserve around 3-5 volumes each year given the time consuming and expensive process of conservation.

Recently we received 4 volumes back from the conservators including one volume labelled, ‘Telescopes I’ and another labelled ‘Telescopes II’. The pamphlets and catalogues within shed light on a wonderful project called the Great Melbourne Telescope. An image of the conserved volume ‘Telescopes I’, with each conserved pamphlet individually protected, is shown below’.

The Great Melbourne Telescope (GMT) was built by Thomas Grubb in Dublin, Ireland in 1868, and installed at the Melbourne Observatory in Melbourne, Australia in 1869. The illustration below, showing the GMT, is taken from a pamphlet found in Telescopes I which records Howard Grubb’s lecture to the Royal Dublin Society in 1869 (Sir Howard Grubb was one of Thomas Grubb’s 8 children and joined his father’s firm in 1864). 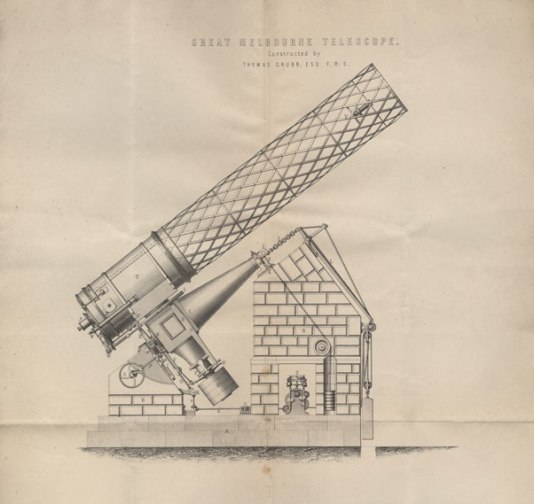 The telescope had a 48-inch diameter speculum primary mirror, and was mounted on an equatorial mounting, enabling it to track stars accurately as they appeared to move across the sky. The design had been approved by a committee of British astronomers and scientists. At the time of commissioning it was the second largest telescope operating in the world, after Lord Rosse’s 6 foot reflector at Birr, Ireland, and it was the largest fully steerable telescope in the world.

The telescope was designed to explore the nebulae visible from the southern hemisphere, and in particular to document whether any changes had occurred in the nebulae since they were charted by John Herschel in the 1830s at the Cape of Good Hope.

When Melbourne Observatory closed in 1945 the GMT was sold to the Australian Government’s Mount Stromlo Observatory near Canberra where it was rebuilt in the 1950s with a modern drive and a new 50-inch pyrex mirror. In 2003 a bushfire destroyed the telescopes and buildings at Mount Stromlo and afterwards the remnants of the 50-inch telescope were transferred to Museum Victoria, which had previously acquired discarded parts of the original telescope in 1984.

Restoration of the Great Melbourne Telescope

Once the IET Archives became aware of the GMT project we contacted some of the team members to let them know about some ‘Grubb pamphlets’ that had been discovered in Telescopes I. We thought that they might be of interest, if they didn’t already have access to the pamphlets, particularly as the pamphlets contained many technical details about the telescope. The GMT project didn’t have these pamphlets or copies of them amongst its papers and so we were happy to supply digital copies of 5 pamphlets to the project team. The pamphlets supplied were;

Museum Victoria kindly supplied us with two recent photographs related to the project (photographs taken by Rodney Start), one of which is shown below.

Museum Victoria also has many 19th century images related to the GMT which can be seen on its website here – GMT Images.

The volume titled Telescopes I included many other interesting pamphlets and catalogues, not just Grubb related material, including a 19th century pamphlet by the German Astronomer Heinrich Louis d’Arrest (1822-1875) which included the plate shown below. 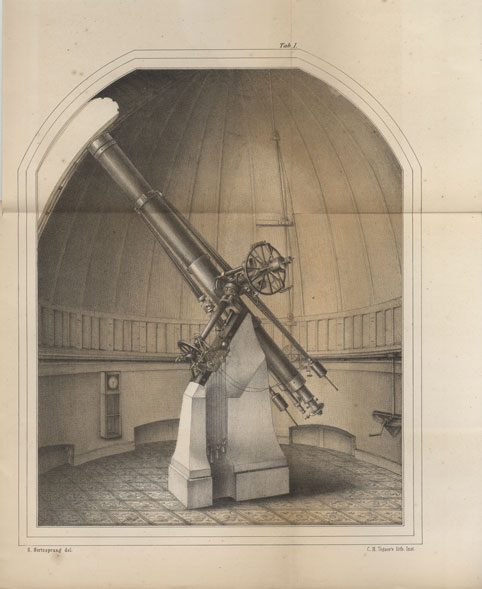 Telescopes I and all the other conserved volumes from the SPT pamphlet collection are held permanently in the strongroom at the IET Archive Centre, Savoy Hill House, and are available for researchers to view by appointment.

One thought on “The Great Melbourne Telescope”