The IET Archives holds a collection of drawings produced by a firm of consulting engineers, founded in the latter part of the nineteenth century, called Lucas & Pyke. Every drawing in this collection had been catalogued, or so we thought, until we recently came across a small uncatalogued folder of Lucas & Pyke drawings that had been deposited shortly after the initial donation which had been made in 1976. The newly discovered folder includes the watercolour shown above and many other light fitting drawings, mostly related to a property called The Tower House in West London.

Prior to the First World War, the firm’s work was mainly concerned with the design of mechanical and electrical services for many of the famous houses in Great Britain, companies and for a number of well-known theatres in London and the provinces.

In the inter-war years, the scope of the practice became wider whilst still acting for many of the pre-war clients and continuing to design mechanical and electrical services for further great houses in Great Britain and France. The increased activities embraced the Barclays Bank headquarters, then the largest electrical thermal storage central heating plant in Europe, the French and Egyptian Embassies, the late Duke of Westminster’s famous four-masted schooner ‘Flying Cloud’, various luxurious office blocks in the City of London, homes for the blind and for old people, and some hotels. The following drawing was a design for the Barclays Bank headquarters in the 1930s.

In the newly discovered folder of material there was a photograph of a four-master schooner (shown below) and we have assumed that this is the Duke of Westminster’s ‘Flying Cloud’ mentioned above. 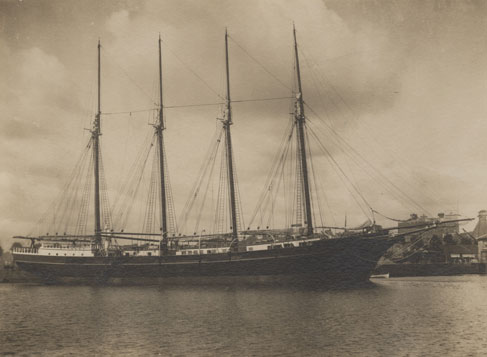 After the Second World War, the practice covered a wider range of engineering services, covering mechanical and electrical engineering services for buildings including; air conditioning; heating and ventilation; water services and drainage; stand-by and base load generators and heat recovery systems; electrical distribution systems and lighting; fire-fighting and fire detection systems; lightning protection systems; insurance and maintenance advisory services; and passenger and goods lifts of both electric and hydraulic types.

Most of the newly discovered material relates to a refurbishment project at The Tower House that was undertaken in the late 1960s and early 1970s. The Tower House, 29 Melbury Road, is a late-Victorian townhouse in Kensington and Chelsea, London, built by the architect and designer William Burges as his home. It was designated as a Grade 1 listed building in 1949. Designed between 1875 and 1881, in the French Gothic Revival style it was described by the architectural historian J Mordaunt Crook as, “the most complete example of a medieval secular interior produced by the Gothic Revival, and the last”. The image below is a recent photograph of the house. 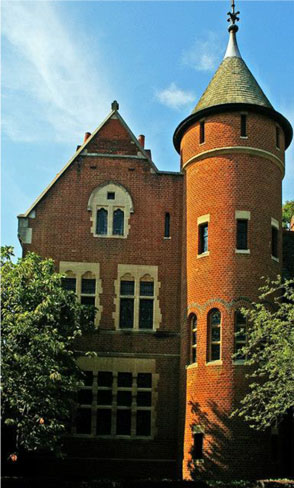 Burges bought the lease on the plot of land in 1875. The house was built by the Ashby Brothers, with interior decoration by members of Burges’s long-standing team of craftsmen. By 1878 the house was largely complete, although interior decoration and the designing of numerous items of furniture and metalwork continued until Burges’s death in 1881. The house was inherited by his brother-in-law, Richard Popplewell Pullan. It was later sold to Colonel T.H. Minshall and then, in 1933, to Colonel E.R.B. Graham. The poet John Betjeman inherited the remaining lease in 1962 but did not extend it. Following a period when the house stood empty and suffered vandalism, it was purchased and restored, first by Lady Jane Turnbull, later by the actor Richard Harris and then by the musician Jimmy Page.

One of several other lighting designs proposed for The Tower House is shown below.

The importance attached by Lucas & Pyke to getting the fittings for this refurbishment to fit in with this grade 1 listed gothic revival house, is revealed by this hand drawn ink drawing of gothic style metalwork found in Deans Yard, Westminster (amongst the newly discovered items).

Lucas & Pyke contracted out the manufacture of its designs and in the case of The Tower House some of the manufacturing was done by the company Best & Lloyd of Warley, Worcestershire.

There are also several photographs of light fittings manufactured by Best & Lloyd in its Gaslite (sic) range, some of which were proposed for The Tower House including the top image below, item 42427. 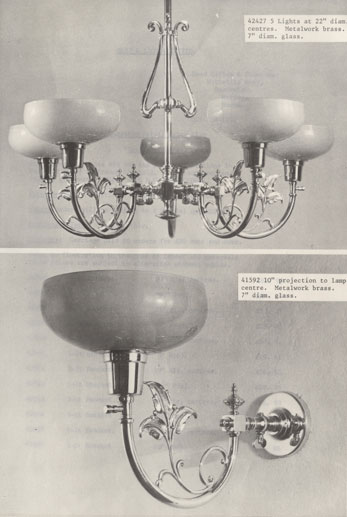 To explore more of the Lucas & Pyke collection of drawings (archive reference NAEST 19), it can be viewed at the IET Archive Centre, Savoy Hill House, London, by appointment.