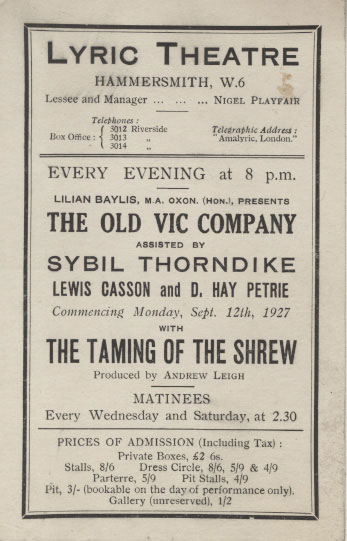 Whilst undertaking some research amongst the many folders in the archives of the Women’s Engineering Society (WES) we came across an unusual file in a series of conference correspondence that was titled, ‘theatre – Miss L Baylis’. What we found in the folder were several publicity items and programmes for theatre productions in the 1920s and 1930s related to Lilian Baylis. One such example is shown above. It comprises a postcard on one side and on the other an advertisement for the latest play being put on at the Lyric Theatre in September 1927, ‘The Taming of the Shrew’ performed by The Old Vic Company.

Initially Baylis was interested in opera which she preferred to other art forms but gradually plays were introduced. The plays of William Shakespeare were often performed and Baylis claimed that the Old Vic had become the London ‘Home of Shakespeare’. The programme below shows the second half of the season at The Old Vic for 1926-27 and demonstrates this mix of opera and plays.

One of the plays being performed in this season was Everyman, a 15th century morality play! A separate leaflet for Everyman is shown below.

In 1925, Baylis began a campaign to re-open the derelict Sadler’s Wells Theatre which she achieved with a gala opening on 6 January 1931 of a production of Shakespeare’s Twelfth Night starring John Gielgud as Malvolio and Ralph Richardson as Toby Belch. The acquisition of Sadler’s Wells enabled Bayliss to develop her plans for a dance company, something she had wanted to do since 1928 when she hired Ninette de Valois to improve the standard of dancing in operas and plays at The Old Vic. For several years the opera, drama and ballet companies known as the Vic-Wells companies, moved between the Old Vic and Sadler’s wells but by 1935 the ballet company, which now included Margot Fonteyn and Robert Helpman, tended to perform at Sadler’s Wells.

The programme below shows The Sadler’s Wells and Old Vic programme for the opening of the 1937-38 season.

Why Were These Items in the WES Archives?

Lilian Baylis was a supporter of both WES and the British Federation of Business and Professional Women (BFBPW). The BFBPW annual report for 1936 has a report on its ‘International Night’ held at the Princes Galleries 27 February 1939 on the subject of ‘women’s work in a modern world’. The report mentions that Caroline Haslett (Secretary of WES and later to be President of WES), Chairman of the BFBPW at that time, was in attendance and amongst the speakers that night were Lilian Baylis, Viscountess Astor, MP, and Amy Johnson (president of WES at that time). This is suggestive of good connections between Lilian Baylis and the senior officials of WES.

However, it is in an obituary for Lilian Bayliss that appeared in the WES journal, The Woman Engineer, December 1937, that the extent of the connection, is made explicit;

“OBITUARY. We share in the widespread regret caused by the unexpected death of Miss LILIAN BAYLIS, CH, MA (Oxon), on November 25th. The press generally has paid tribute to her outstanding work for the theatre, opera and ballet, and we are already acquainted with the great part that she played in these directions. As a Society [WES], however, we appreciate these the more because we had the little extra personal knowledge that enabled us to realise her enhanced greatness.

At International Night of the Federation of Business and Professional Women two years ago she shared the platform with Lady Astor, Miss Ellen Wilkinson and our own Amy Johnson. At our recent conference she received us after the performance of ‘Pygmalion’ and introduced us to the cast.

On October 18th we joined the Electrical Association of Women Demonstrator’s circle in a rapturous hour or two in listening to Lilian Baylis ‘rambling on’ in the most attractive fashion about her work, a memory to be greatly prized. As a result a large party of us visited the Old Vic to see ‘Measure for Measure’ and incidentally to have a conducted tour of the premises.

All this gives a personal touch to our regret. The Old Vic and Sadler’s Wells are visible monuments to Lilian Baylis but for many years she will live in the memories of thousands of theatre goers and of those privileged, like ourselves, by greater intimacy’”

The earlier image of the Old Vic programme showing a performance of Pygmalion is probably from the visit to see Pygmalion referred to in the obituary. We might therefore assume that all the programmes in this WES folder were from specific visits by WES members to the theatres of Lilian Baylis and on these occasions it is likely that those members received a very personal touch from Lilian!