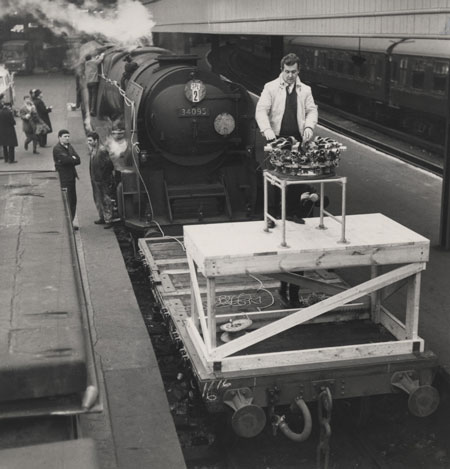 The above image shows a Circlorama camera rig being fitted to the specially erected staging on a conflate wagon. This photograph was taken prior to a ‘special run’ being made by a train between Waterloo and Wimbledon in order to film the northern approaches to Clapham Junction Station and also trains passing in that area.

The image comes from the photographic collection of the company Evershed & Vignoles Ltd (E&V) which we hold in the IET Archives. The reason for E&V having this and other photographs related to Circlorama is that it made the synchronous motor that kept the 11 cameras in the rig ‘in sync’ during film shooting.

The ‘Circlorama’ process was developed by the Russian professor E Goldovsky of the Moscow Cinema Research Institute. A temporary cinema capable of showing Circlorama films, unsurprisingly called the London Circlorama cinema, was built in less than 7 weeks on an empty bomb site on the northern corner of Piccadilly Circus and Shaftesbury Avenue in London. The cinema opened on 9 May 1963 showing a 20-minute documentary film called Russian Roundabout. The Circlorama cinema was set up by Leonard Urry together with Leon Heppner, a Russian entrepreneur who had lived in London for several years.

The cinema, which could hold 500 people, was completely circular, and the customers would stand in order to watch the 11 screens with which they were surrounded. Speakers were housed behind the screens, in the ceiling, and under the floor.

A second film called Circlorama Cavalcade, made by Stanley Long, was introduced in 1964 to replace the Russian film. The new film was shown until 1965, when the cinema was closed and the site taken over by the Classic Cinemas chain whereupon it was converted into a conventional single screen cinema (information about the cinema site obtained from the Cinema Treasures website).

Stanley Long (1933-1912), had been asked to make a new film for the Circlorama cinema by Leonard Urry who had financed one of Long’s earlier films. Stanley Long’s lengthy account of the whole experience, including full technical details about the history of Circlorama can be found on the in70mm.com website.

In addition to the Clapham Junction section of this 20 minute film, there were numerous other ‘vignettes’ including a view from inside a cage of lions (Chipperfield circus). This subject matter appears in two of the E&V photographs which are shown below.

Another subject that appears in the Circlorama Cavalcade film is car racing at the Snetterton Circuit motor racing course in Norfolk. The E&V collection includes two photographs associated with the motor racing clip (see below) which show the camera rig mounted on the back of a Jaguar E-Type. 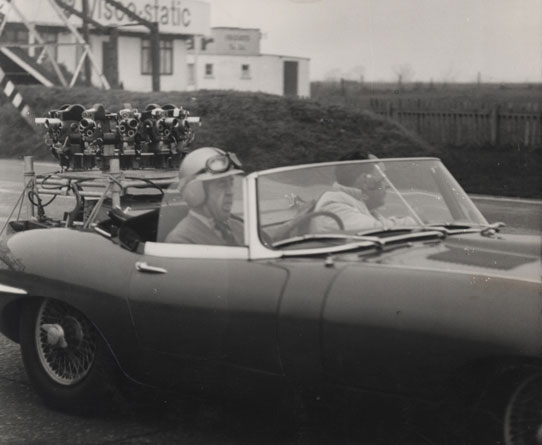 After the closure of the Circlorama cinema in London, a ‘portable’ version, which had been made by the company Harkness Limited, was erected on Blackpool West Pier for the 1965 summer season (still showing the Circlorama Cavalcade film). This was not commercially successful, in part due to the equipment continually breaking down in the salt air, and so the structure was then moved to the Kelvin Hall Glasgow. However, almost immediately after erection, Circlorama filed for bankruptcy. Latterly the structure was scrapped, the projection equipment sold off to post-production film and television companies, and the cameras were sold to the Ministry of Defence.

For anyone wishing to view these and other photographs within the Evershed & Vignoles corporate collection of photographs, the photographs have been catalogued with reference NAEST 102/5, and they can be viewed at the IET Archives, by appointment.