The Awards and Medals of H. Peter Jost – A New Acquisition! 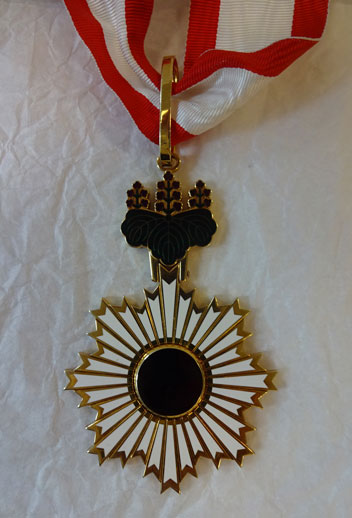 Professor H. Peter Jost CBE (1921-2016) was the 1977 President of one of the IET’s predecessors, the Institution of Production Engineers (IProdE), and he was made an Honorary Fellow of the IProdE in 1980. He was closely associated with the discipline of tribology and received many awards for his work in that field. One such award was the Japanese honour called the ‘Order of the Rising Sun, Gold Rays with Neck Ribbon’ which was awarded to Peter Jost in 2011 and which came with the medal and ribbon shown above. This award was made on 1 July 2011 by Japan Ambassador Keiichi Hayashi, for Peter’s outstanding contribution over many years to the promotion of relations in the field of tribology between Japan and the United Kingdom.

We have very recently received a group of Peter Jost’s medals which were secured by an IET member at an auction in March 2018. That eagle-eyed individual had spotted the name of H. Peter Jost on an IProdE Nuffield medal during a viewing of auction lots prior to the auction, and then contacted the IET Archives the day before the auction to see if we had an interest in the medals, given the close connection between the IET and Peter Jost. We were delighted to receive that call, and were very interested in the medals, in particular because the Nuffield medal that was awarded to Peter Jost in 1981 which was the first ever Nuffield medal awarded by the IProdE – see image below.

The medals were split between 2 lots in the auction, and with only one medal having a name on it, we undertook a little investigatory work to try and tie-in some of the medals to Peter, other than the Nuffield medal, which we were ultimately able to do prior to the commencement of the auction. Following the auction, the auctioneer was also able to confirm that both medal lots had come from the same estate.

Another important medal found within the lots and which also relates to the history of the IET, is the IProdE ‘Past President’ medal (shown below). Up until this point we haven’t had this medal amongst the archive collections.

There were many obituaries written about Peter Jost following his passing away in 2016 and the following is an extract from the IOM3 website obituary written in June 2016 by Robert Wood and Keith Harrison (Peter Jost was an Honorary Fellow of IOM3 and the Institution of Mechanical Engineers in addition to the IET).

This year [2016] is the 50th anniversary of the government report on lubrication, friction and wear published on 9 March 1966, which was written by a committee chaired by Dr Jost, who coined the engineering subject name ‘tribology’ within the report. A reception was held by Prince Philip at Buckingham Palace in March to celebrate the anniversary. During this reception Peter was made an Honorary Fellow of IOM3, of which he was immensely proud.

His advice to the UK Government included the very significant 1966 DES Jost Report, which demonstrated that avoidable wear was costing the UK huge sums of money every year. It resulted in the setting up of several centres for tribology. He was an active member of the Parliamentary and Scientific Committee and authored more than 150 publications, including a critical patent and a still classified paper. His industrial career involved being general manager, chairman and entrepreneur successfully establishing several tribology-based companies that covered the manufacture of lubricants, coatings and mechanical systems.

In 2009, still very active following a successful industrial career, he co-launched the concept of green tribology, paving the way for the first Green Tribology World Congress with 2,000 attendees. He was President of the International Tribology Council from 1973 and was a founding member of the IMechE Tribology Group from 1966.

During his long and distinguished career Peter was appointed a Commander of the Order of the British Empire (CBE) in 1969 by HM the Queen and was awarded many other honours including two honorary Professorships and eleven honorary doctorates. His numerous major international honours include awards from the Heads of State of France, Germany, Poland and Austria. In 2011 the Emperor of Japan conferred the Order of the Rising Sun upon him. In 2013 Peter was awarded the RAEng sustained achievement award.

Other Peter Jost Medals Within the Auction Lots

The obituary above and other biographical sources informed us that Peter Jost had received international honours from both Germany and Austria, and this knowledge eventually helped us to track down that background to 2 further medals within the auction lots and these are shown below.

Firstly, ‘The Austrian Cross of Honour for Science and Art – First Class’. The award was made in recognition of Professor Jost’s important contribution to science and industry as related to the Republic of Austria. The decoration was presented to Professor Jost by the Austrian Ambassador at a ceremony at the Austrian Embassy in the UK on 4th July 2001.

Secondly, ‘The Order of Merit Cross, First Class, of the Federal Republic of Germany’, 1993. German Federal President, Richard von Weizsacker, conferred the honour on Peter Jost, ‘in recognition of his outstanding contribution to international co-operation in tribology’. At a ceremony at the German Embassy in London, Minister Plenipotentiary & Extraordinary, Dr Friedrich Kroneck, presented Peter Jost with the insignia on behalf of the President of the Federal Republic of Germany saying, ‘your determination to ensure that engineering remains a good servant of man and not the other way round has earned you a well-deserved worldwide reputation’. A report about this can be found in Manufacturing Engineer, February 1993, but there is a possibility that the award was actually made in late 1992.

Whilst we managed to uncover the background to 7 of Peter Jost’s medals, there was one medal to which we couldn’t attach a name and source, and that is shown below.

If anyone has any knowledge above the above medal, including when it might have been awarded to Peter Jost, we would be delighted to hear from you.

For anyone wishing to view the medals of H Peter Jost, the collection has been catalogued with reference OPC/3/14, and as usual it can be viewed at the IET Archives, by appointment.