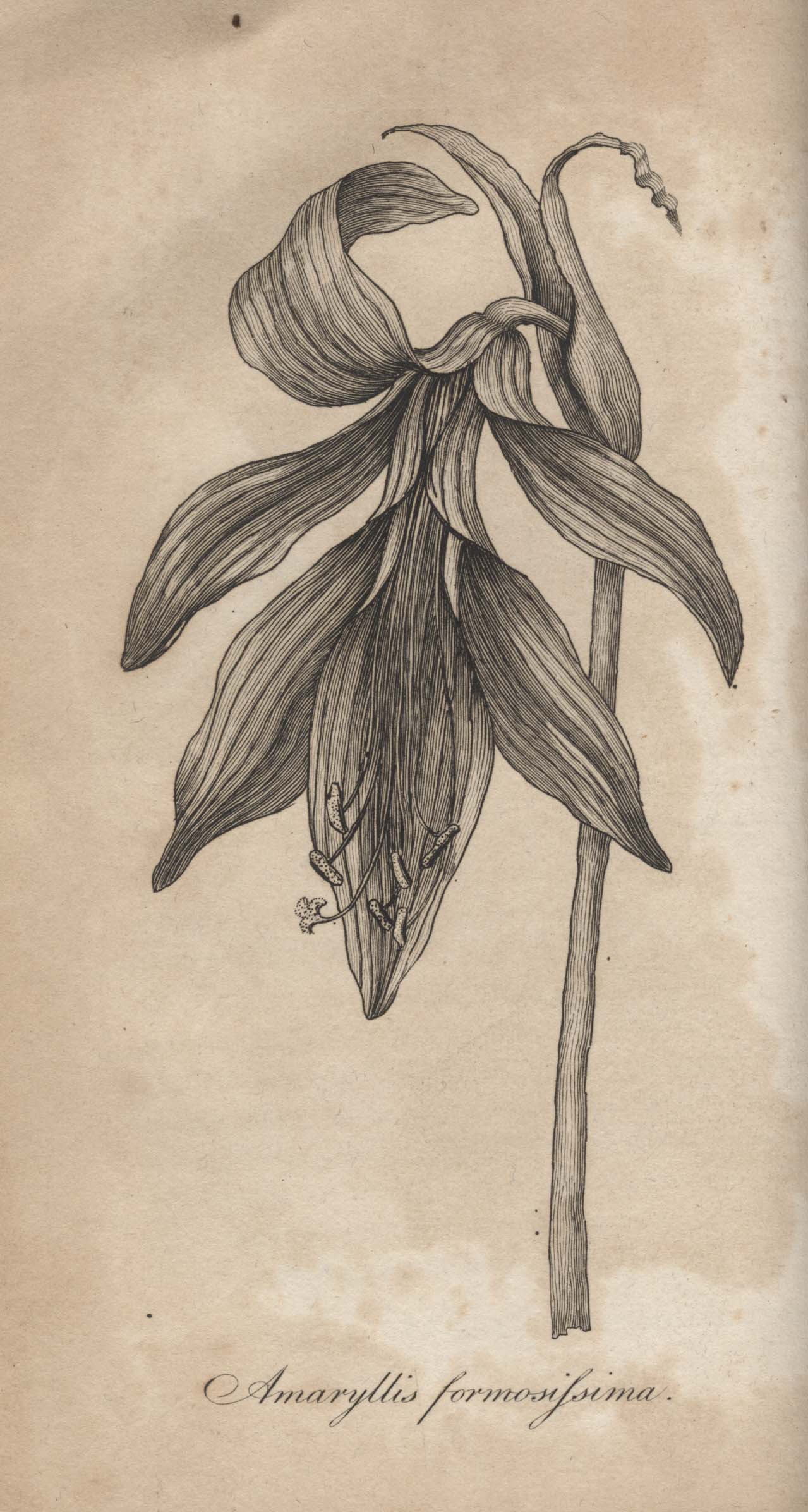 The image above is from The Botanic Garden, a collection of two poems, The Economy of Vegetation and The Loves of Plants, written by Erasmus Darwin and first published in 1791 by Joseph Johnson in London. The edition held by the IET Library and Archives is the fourth edition from 1799 and forms part of the collection of Silvanus P. Thompson purchased in 1917 by the IET. The original edition was published in quarto size, but to reduce costs and gain a wider readership, it was reissued and reprinted in octavo size. The book is notable for reproducing five engravings by the English artist and poet William Blake, including that of the Amaryllis above. The frontispiece is a design by Henry Fuseli, a Swiss painter who lived in London for much of his life.

The Loves of Plants advances early theories of evolution as well as the Linnaean classification scheme, named after the Swedish botanist Carl Linnaeus, who recognised that plants contained male and female reproductive organs. At the time this was regarded as controversial and writers and translators of books about botany sought to remove overtly sexualised language from their books, with consideration for female readers as botany was accepted as a feminine subject. Darwin regarded this as unnecessary and, in his poem, retains the language of Linnaeus and describes in detail the arrangement and proportions of the reproductive organs. The male stamen and female pistil are anthropomorphised as a bride and groom.

The Economy of Vegetation is divided into four cantos, addressed to the four elements of earth, water, fire and air, and charts the history of the world from creation to the time that Darwin was writing, celebrating scientific and technological progress. He describes in verse the processes of forging metal, mining, and the invention of the steam engine. Mythical figures such as Achelous and Hercules appear in the poem, alongside contemporaries of Darwin like Benjamin Franklin and Joseph Priestley.

The Botanic Garden is one of the first popular science books, with Darwin using verse to encourage interest in botany and science generally amongst readers. There was some disagreement as to Darwin’s skill as a poet with William Wordsworth describing it as “dazzling” whilst Samuel Taylor Coleridge claimed, “I absolutely nauseate Darwin’s poem”. Although seemingly different in subject matter the two poems reflect Darwin’s belief in the necessity of scientific progress and an evolutionary view of the world. He was an admirer of the ideals of the American and French revolutions which is reflected in both poems. As the French revolution became increasingly violent, Darwin’s work fell out of favour and was not published during the first two decades of the nineteenth century.

Who was Erasmus Darwin?

Erasmus Darwin was born in Nottinghamshire in 1731. The youngest of seven children he would study at Cambridge and later at the University of Edinburgh Medical School. He moved to Lichfield where he became a doctor and was known for treating the poor for free. George III invited Darwin to be his personal physician, but he refused and remained practising medicine in the Midlands.

As well as working as a doctor, Darwin was an inventor and writer. He was opposed to slavery, financing the abolitionist movement, criticising manufacturers in the Midlands who profited from slave ownership and lobbying parliament to abolish slavery. He created designs for a copying machine, a wire-drawn ferry, a rocket engine and a lift for barges, but did not patent any of them, keen not to distract himself from his work as a doctor. Darwin wrote several books, including The Botanic Garden and Zoonomia, a book about anatomy and pathology.

Darwin was a member of The Lunar Society, named because they met monthly near the full moon, when, as there was no street lighting, it was safer to travel home after meetings. Members met to discuss issues of the day and have dinner. As well as Darwin, other notable members of the society included Joseph Priestley, credited as the discoverer of oxygen, the engineer and inventor James Watt, and Josiah Wedgewood, the potter and founder of the Wedgewood company. They would often meet at Erasmus Darwin’s house in Lichfield, which is now a museum dedicated to his life and works.

Darwin, who had suffered from chronic illnesses throughout his life, died in April 1802. He married twice and had 14 children, including Robert Darwin, who was the father of Charles Darwin, best known for his insights into the theory of evolution.