Recently I was fortunate enough to attend a highly amusing and informative show aimed at children called ‘inventive science’. It was all about showing the next generation how ordinary household objects and a bit of ingenuity have created many of our amazing technological appliances of today and encouraging them to do the same.

One of the interactive games was to guess how a can of cat food, a coffee tin and a vacuum cleaner had evolved into something we recognise today. I had to sit smugly silent in the audience while all the adults and children were shouting out their guesses as only a few days before I was reading through a file of correspondence from Sir Christopher Cockerell which had given me the answer.

The answer was discovered in a file of correspondence and technical information relating to the design and patent disputes for the Hovercraft (SC MSS 165/1/1/26).

Although a small file of papers, their contents permit an understanding of Cockerell’s frustration over the private sector’s lack of desire to invest in new projects and his prevention from making his invention public as had been placed on the Government’s Secret List.

A letter to Lord Caldecote, Director of English Electric from 1953, opens with an apology from Cockerell for the rushed approach. The reason was that he had been trying to gain permission to contact them for three months and now only had days to prepare his patent specifications.

The letter also includes Cockerell’s ‘explanation’ of the Hovercraft lift principle which he prepared for the US Patent Office. It only consists of the bones, he explains, but being such a new idea there was nothing in the ‘Aeronautical or Marine’ literature covering this subject. “It is an absolutely unexplored field”.

A further statement from Cockerell sheds light on the anomaly of his idea; Hovercraft  did not fall under the category of either an air or sea vessel and as a result he was having great difficulty attracting backers as neither the military nor the admiralty wanted to invest. Cockerell commented,

“A Hovercraft is neither a ship, nor is it an aircraft, and it is therefore nobody’s business at the moment.”

Food cans and a vacuum cleaner!

So where do the food cans and a vacuum cleaner fit in to this discussion about an idea that was deemed so important by the Government it was placed on the Secret List?

Using a can of cat food inside a coffee tin and the reversed air-flow from a vacuum cleaner Cockerell tested his theory that a vehicle could hover above the ground. Written in his notes for a British patent application in December 1957 he records that some work was done in 1953-1954 to reduce the skin friction of a boat by inducing under it a film of air. The experiments were partially successful but what was required was a means of keeping the air in place. Following from this is a technical description and hand-drawn diagrams explaining the calculated performance using air.

“The essential object of the system is to enable a vehicle to be raised a small distance from the ground, in order to obtain a layer of air under it, using a jet thrust which is many times less than the weight of the vehicle.”

Within the file are some small black and white photographs of his model travelling over land and water. The model weighed about 4.5lbs and was powered by a model areo engine. These photographs have been scanned and are shown below. 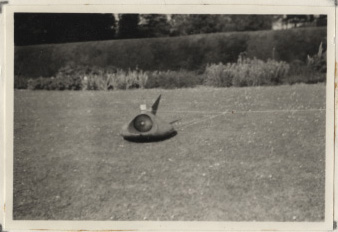 At last – a chance to approach potential investors!

Cockerell was able to approach investors in spring 1958. In a letter to Sir George Nelson, Managing Director of English Electric, dated 18 March 1958 he asks to be given an audience.

“I write because I want to ask you for some help with an invention, at present on the Secret List, and I write to you because I know that you are not averse to new ideas or to real pioneering.”

“This project is so new and novel that it is proving about as difficult to get going as Whittle’s jet, since being neither an Aircraft nor a boat, it does not fall within the terms of reference of any existing team or firm.”

He requests a meeting to present a film of a model of the invention in action and thus he is sure that he will take the view that it merits investigation.

In a copy of the letter sent to the Controller of Patents dated 15 March 1958 he states it would be a shame if this invention was not given due attention as in the case of Whittle’s jet,

“It would be rather a pity if the patent position of a highly novel scheme which could conceivably one day result in a large new industry for this country, be allowed to go by default, like Whittle’s jet, for the lack of expert attention, a little imagination, and a couple of thousand pounds being made available somehow or other at the right time.”

This is the second reference to Sir Frank Whittle in the correspondence and Cockerell draws a parallel between the barriers he faced and those that Whittle also came up against, namely investment and lack of support for his jet engine some twenty years earlier.

Having filed the patent in December 1955 and its subsequent placement on the Government’s Secret List he was unable to talk about the invention or gain financial investment. Cockerell’s exasperation at the situation can be seen when he wrote,

“I cannot complete these provisionals unless I can obtain some financial assistance, and I have no hope of doing that if I am not permitted to discuss the project with anyone who might be in a position to provide it.”

On hearing the news that another inventor had taken out a provisional patent in Switzerland in October 1957 he ends the letter with a simple plea,

“Please help. There is so little time.”

Later in 1958, after Hovercraft was declassified from the Secret List, Cockerell was able to approach the National Research Development Corporation (NRDC) which funded the design and construction of SRN1 – the world’s first human-carrying amphibious hovercraft.

The Hovercraft is launched

On 25 July 1959 the hovercraft crossed the English Channel and at last Cockerell’s dream had become reality. In the same year the NRDC formed a subsidiary, Hovercraft Development Limited (HDL) to control the project and to attract private investors. Cockerell sat on the HDL board and by 1966 commercial cross-Channel services began.

The dream was bittersweet though. Right from the start the project suffered from a shortage of private investors and lack of enthusiasm for development. What little it did garner was from the government via the NRDC. As a result Britain retained a lead in development but rivals were hot on their heels. In 1966 NRDC decided to merge the companies involved with production into one corporation. Disagreeing, Cockerell resigned from HDL believing that competition fuelled greater industry.

His resignation triggered a profound debate about how Britain viewed industry and its inventors. Despite being a prolific inventor, having patented 70 inventions, Cockerell joined the list of scientists and engineers who believed that they were profited from but later mistreated by the British government. He had to fight long and hard to get the hovercraft idea taken seriously by investors as our file of correspondence shows. Then he had to fight to receive the remuneration he was owed for his patents. However, he refused offers to join the brain drain to America during the 1950s and 1960s and remained in Britain to see his hovercraft become a commercial success carrying millions of people and cars across the Channel.