The IET Archives has recently completed the cataloguing of a collection of papers relating to Plessey Semiconductors and its integrated circuit products from the late 1960s and early 1970s. The collection of primarily published material such as data sheets, technical communications, and product leaflets was collected by an employee of the company, Peter Grant, who worked on integrated circuits. We were particularly pleased to receive this donation as it is a nice accompaniment to a large corporate collection of Plessey papers that we already hold (archive reference NAEST 96). A typical data sheet from the recent deposit, describing Plessey’s component MP224, and dating from May 1967, is shown below.

Jack Kilby (1923-2005) was an American electrical engineer who took part (along with Robert Noyce of Fairchild) in the realisation of the first integrated circuit whilst working at Texas Instruments (TI) in 1958. He was awarded the Nobel Prize in Physics in 2000, ‘for his part in the invention of the integrated circuit’ – Nobel Prize official web site. Jack Kilby’s image can be seen at the IET’s Savoy Place venue in its ‘gallery of engineers’ exhibition – Gallery of Engineers Website

An integrated circuit or monolithic integrated circuit (also referred to as an IC, a chip, or a microchip) is a set of electronic circuits on one small plate (‘chip’) of semiconductor material, normally silicon, which can be made much smaller than a discrete circuit made from independent electronic components.

The Plessey image below, from 1967, shows a master circuit two hundred and fifty times the final size of the circuit.

Plessey and the manufacture of integrated circuits

The concept of the monolithic integrated circuit (IC) was first made public by G W A Dummer of the Royal Radar Establishment (RRE) Laboratories, Malvern, UK, at a conference in Washington DC in 1952. At about the same time, the idea that it might be possible to fabricate an integrated circuit had been put forward in the United States and the first patent for such a device was filed 21 May 1953 by H Johnson of the Radio Corporation of America (RCA).

As a result of the work carried out at RRE a contract was placed with the Plessey Company Research Laboratories in April 1957 for the development of semiconductor integrated circuits and a model (made of card and paper) was exhibited of an IC flip-flop circuit at the International Components Symposium at RRE in September 1957. However, in spite of this early initiative the integrated circuit concept did not appear to have made an appreciable impact, and when no government funds were forthcoming, the idea was abandoned and the early technical lead was lost. Dummer wrote that, ‘although early work had been done in the field of IC’s by Plessey and RRE’s Physical Lab, it was not until February 1960 that a team was formed at RRE to study semiconductor techniques’.

Jack Kilby stated, ‘in 1956, Dummer let a small contract to a British manufacturer (The Plessey Company Ltd). They were unsuccessful in realising a working device primarily because they were working with grown junction transistors’.

Plessey eventually began its involvement with manufacturing IC’s at the start of the 1960s but this was undertaken with American assistance. Three types of transistor – germanium alloy, diffused alloy and silicon alloy – were produced with a Philco Corporation process and the manufacture of rectifiers was carried out under licence from General Instrument Corporation.

Subsequently Plessey gained considerable experience with a wide range of planar diodes and transistors, developed entirely within Plessey. The original development and pilot production was done at the Allan Clark Research Centre at Caswell and the larger scale manufacture was undertaken at the semiconductor factory at Swindon which undertook a large expansion in 1967. Plessey believed that in 1967 it had Europe’s most advanced silicon integrated circuit production facility.

The images below are from 1967. The first image shows a probe testing slices of integrated circuits using a computer controlled tester. The second image shows a suite of laminar flow benches in which the photoengraving process is carried out – handling photosensitive materials required the use of special lighting. 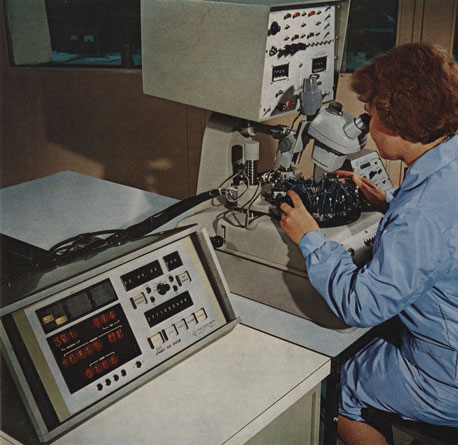 What happened to Plessey?

Plessey was originally founded in 1917 in Marylebone, London and its original shareholders were T H Hodgson, C H Whitaker, Raymond Parker and his brother Plessey Parker. In the 1920s Plessey diversified into electrical manufacturing including the manufacture of early radios for Marconi and telephones for the GPO and they produced the first production televisions for John Logie Baird in 1929.

In 1951 the Electronics Division was started by Michael Clark. In 1961 Plessey merged with the British Ericsson Telephone Company and the Automatic Telephone & Electric (AT&E) to become Britain’s largest manufacturer of telecommunications equipment. The Plessey Company plc was listed on the London Stock Exchange and was a constituent of the FTSE 100 Index but in 1989 was taken over by a consortium formed by GEC and Siemens which split the assets of the Plessey Group.

This new collection of Plessey material (archive reference NAEST 238) can be consulted at the IET Archive Centre, Savoy Hill House by appointment.