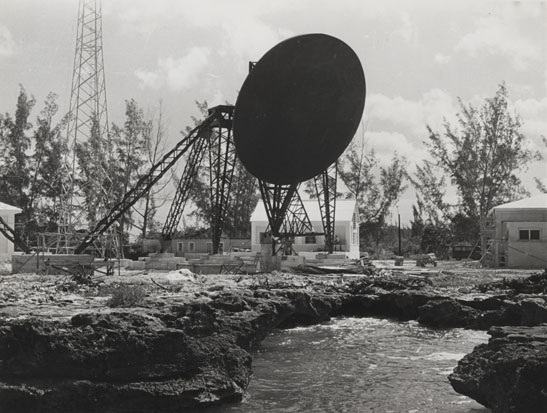 The IET Archives has just completed the cataloguing of a collection called the ‘Alfred Delamare Papers’, the second of four collections donated in the second half of 2015 relating to individuals who spent most of their working lives with Standard Telephones and Cables Ltd (STC). 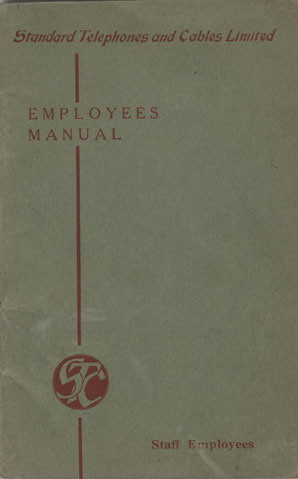 We know very little about Alfred other than his IEE membership details. Alfred Charles Delamare joined the IEE as a Graduate member in 1935 and became an Associate Member in 1944. He became a Member in 1964, and then a Fellow in 1966 when the IEE’s membership category structure changed. Alfred spent his working life with Standard Telephones and Cables (STC).

The material deposited comprises mainly technical reports and articles written by Alfred and a large collection of official STC photographs of equipment and installations. Many of the photographs have no description but amongst those with annotation on the reverse there is an interesting series of photographs of communications facilities in South Africa and also in Ireland.

Other material in the collection includes a wonderful commemorative booklet with original photographs from an IEE visit to STC’s New Southgate facility in 1957 and an STC employee manual from 1941 which is shown above. That 91-page manual includes general regulations such as the following;

“Great importance is attached to punctuality”

“Employees shall not enter or leave the factory by other than the appointed entrances or exits.”

“Smoking is not permitted during an employee’s normal working hours”.

“Employees are not permitted to have personal letters, postcards, etc, forwarded to them at the Company’s address.”

Photographs of communication facilities in South Africa and Ireland, circa 1960

The two series of photographs of installations that are annotated are from South Africa and Ireland. The South African photographs, circa 1960, are just marked ‘South Africa’. One of the wonderful images from this series is shown below.

The Ireland photographs are well annotated and are all photographs of the Galway/Athlone radio link circa 1960. The image below shows the Cappataggle repeater.

Unfortunately, there are many photographs, such as the one below, from unknown locations. Hopefully over a period of time researchers who consult this collection will be able to pinpoint the locations and the facilities to fill in the gaps in our knowledge! 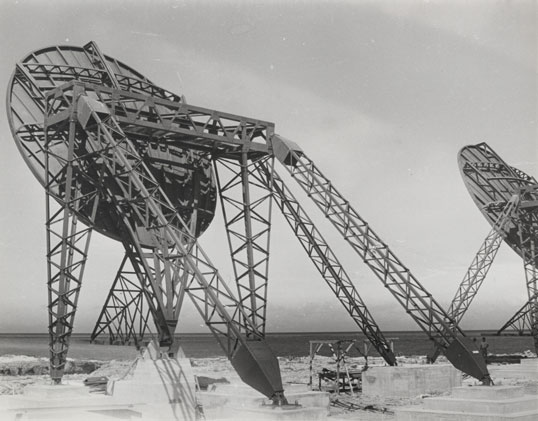 The collection includes two commemorative items that were produced for The Institution of Electrical Engineers Radio and Telecommunication Section summer visit in 1957 to STC at New Southgate and to Hatfield House. The visits took place on 13 July 1957.

The first item is an inscribed folder with several booklets/leaflets inside including a luncheon menu for the visit and a booklet titled, ‘worldwide telecommunications’ which was produced to accompany STC’s exhibition of systems, equipment and components at New Southgate in July 1957. The luncheon menu is reproduced below, and whilst the food provided appears relatively light and appropriate for the summer, the amount and range of alcohol on offer appears quite challenging! 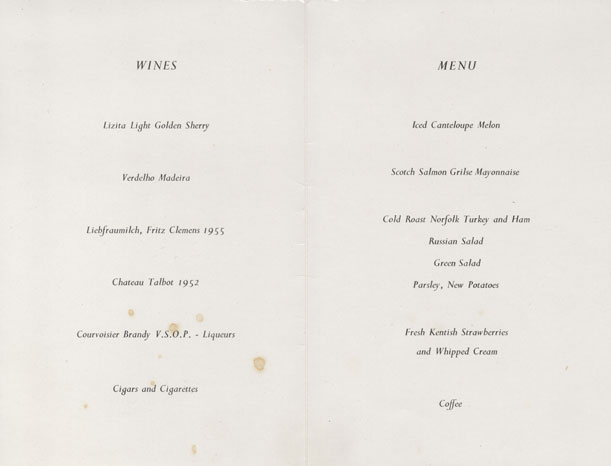 The second commemorative item from the visit is an inscribed booklet containing formally mounted photographs of the visit (including a compliments slip from the Publicity Manager at STC). Two of the photographs are shown below. The first shows the first of the coaches arriving at New Southgate, and the second shows, ‘guests leaving the Commutated Antenna Direction Finding equipment’.

For those interested in the history of STC and its communication products, the Alfred Delamare collection has been catalogued with an archive reference SC MSS 274 and is available to consult by appointment at the IET Archive Centre, Savoy Hill House, London.