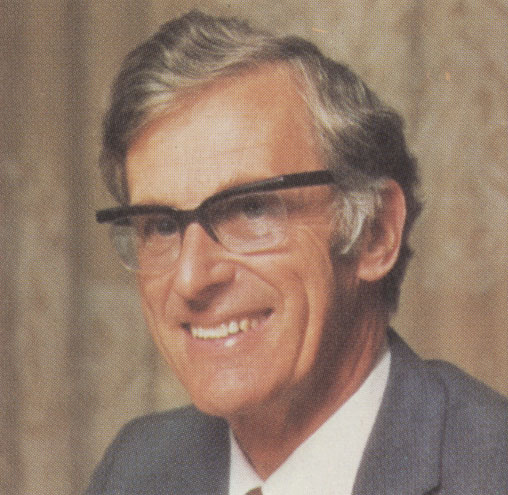 In 2015 the IET Archives received a donation of papers concerning the British electricity and power markets in the late 1970s and early 1980s. The papers were the personal records whilst in office of Glyn England, the Central Electricity Generating Board (CEGB) Chairman from 1976 (just before his appointment as CEGB Chair in 1977) up until his departure in 1982. The above image shows Glyn England in 1978.

The papers originally came in a series of lever arch files, in date order, include; a diary schedule for each day; power industry press cuttings for each day; correspondence with Ministers, other industry heads and union leaders; and reports of the CEGB (many of them confidential internal CEGB reports). This material therefore gives a very detailed insight into the running of the UK’s electricity and power sectors at that time including the political considerations that affected decision making and the involvement of politicians in the industry.

There were only 6 Chairmen of the CEGB from the time of its establishment by section 2 of the Electricity Act 1957 up until the privatisation of the electricity industry in 1990. Glyn England was the 5th Chairman from 1977 to 1982 (replaced by Walter Marshall, the last Chairman, who held office from 1982 until 1989).

Glyn England’s time in office came at a time of great upheaval not only in the electricity and power industries but also in British politics and during his time in office he reported to 3 different Secretaries of State, with very different political backgrounds. The first Secretary of State for Energy to whom Glyn reported was the Labour MP, Tony Benn (Secretary of State for Energy from 1975 until 1979 under two Labour Prime Ministers, Harold Wilson and James Callaghan). Glyn then reported to two Conservative Secretaries of State for Energy, firstly David Howell (1979-1981), and then Nigel Lawson (1981-1983). Both David Howell and Nigel Lawson held their positions during Margaret Thatcher’s first term in office as Prime Minister.

Tony Benn sent a handwritten letter to Glyn England appointing him as Chair of the CEGB on 7 July 1976 (letter in collection) and then he sent a formal letter of appointment on 22 July 1976 – this letter is show below. 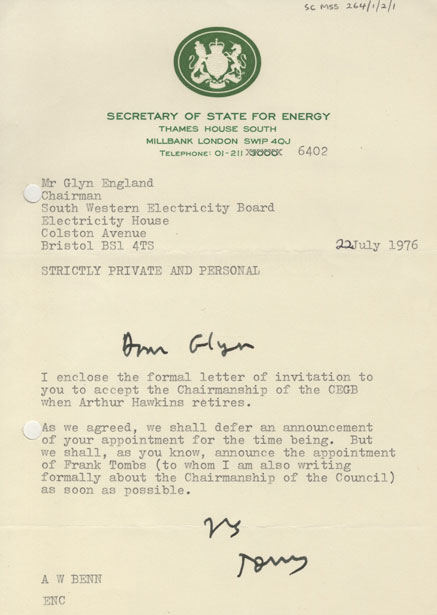 The IET Archives is very grateful to its volunteer, Eric Everatt, who has catalogued this collection which has been described down to item level. This means that not only is every report and paper listed in the catalogue, but also the title of every press article. This allows a researcher to track press interest in electricity/power industry issues throughout Glyn England’s tenure. Without Eric’s assistance it would not have been possible to catalogue this important collection in so much detail.

Glyn England was born 19 April 1921 in Llantrisant, South Wales, and died 20 June 2013 in Ubley near Bristol. He was educated at Penarth County School and London University (Queen Mary College).

The youngest of seven sons of Alice and Charles, who was the head teacher of the local primary school, he left the Rhondda Valley at 18 and got a job as a lathe operator in Slough, Berkshire. He then became a Scientific Assistant in the Road Research Laboratory, where he was working at the start of WWII. At this point war service took him to India. Glyn then married Tania Reichenbachin, a German refugee in 1942. After 1942 his work history was as follows;

In the 1950s he served as a Labour county councillor in Hertfordshire. Glyn left the Labour party to become a founder member of the Social Democratic party (SDP) when it was formed in 1981. He was a JP, school governor and Chairman of various organisations including the Mendip Society and the Bayswater Institute. Two notable obituaries were written about Glyn following his death. One was written by Gordon Cramb (appeared in the Financial Times, 10 July 2013) and the second was written by his daughter Jan Glynn (appeared in the Guardian, 22 October 2013).

The collection whilst titled, the personal papers of Glyn England, perhaps says a little less about Glyn England, the individual, and perhaps says more about the Secretaries of State for Energy to whom Glyn reported, and the prevailing political environments. Whilst some of Glyn England’s industrial perspectives and beliefs are apparent from the papers, the collection does not contain private family papers and correspondence or material from his interests outside of being Chair of the CEGB. On the other hand the collection does bring out strongly how the governments of the day wanted to use the CEGB to meet various political objectives.

Gordon Cramb’s obituary for Glyn England says that he was among the first wave of public sector chiefs to fall victim to the changes being imposed by Margaret Thatcher’s administration (Nigel Lawson declined to renew his contract). Cramb went on to say, ‘the government was, however, preparing for both privatisation and for the coming clash with the coal miners. The impression grew that England was, in Thatcherite terms, simply seen as insufficiently “one of us”.’

Glyn England wrote a 12-page letter to Nigel Lawson, dated 8 May 1982, during his last week in office, regarding his leaving and expressing his hopes and concerns. Nigel Lawson then replied with a single page letter, dated 20 May 1982, sent to Glyn England’s home address which was quite stinging in tone and which included the sentence, ‘I was sorry to receive so defensive and partial an account of familiar and complex issues’. That letter is reproduced below and gives a fascinating insight into the political nature of the material that can be found in this collection.

The Glyn England papers have been catalogued with an archive reference SC MSS 264 and are available to consult by appointment at the IET Archive Centre, Savoy Hill House, London. They should prove to be a valuable resource not just for those interested in the history of the UK electricity and power sectors but also those interested in British industrial and political history and the relationship between politicians and nationalised industries.