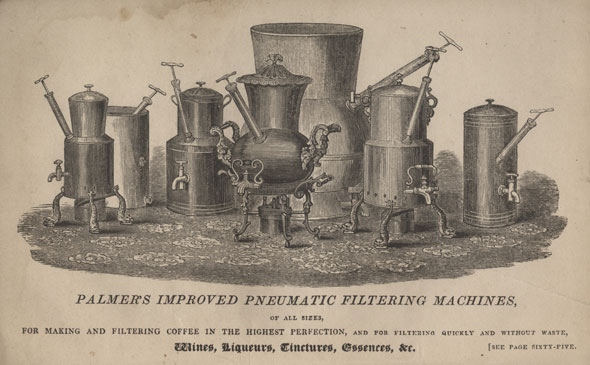 The second out of four recently conserved volumes from the Professor Silvanus P Thompson collection of pamphlets, has the title ‘Instruments Not Electrical II’. The wide range of pamphlets and catalogues in the volume cover a diverse range of instruments ranging from theodolites and microscopes to anemometers and pantographs.

The oldest catalogue in the volume, published in 1840, is from the manufacturer Edward Palmer of 103 Newgate Street, London. ‘Palmer’s New Catalogue’ claims to include 300 engravings of ‘apparatus illustrative of chemistry, pneumatics, frictional & voltaic electricity, electro magnetism, optics etc’. One of the illustrations from the catalogue showing ‘filtering machines’ designed for use with coffee and other beverages is shown above and the cover of the catalogue is shown below. 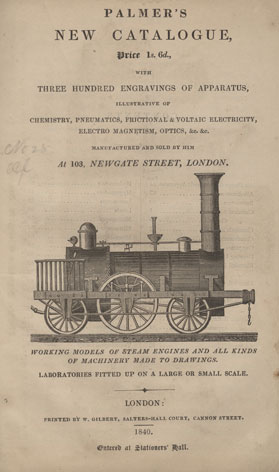 In an advertisement in an 1843 issue of ‘The Edinburgh Review’ Edward Palmer describes himself as an ‘operative chemist, chemical and philosophical instrument maker’ and he describes the above catalogue as one of ‘philosophical apparatus’.

A web article by Brian Stevenson, Kentucky, USA, written in January 2014, talks of this catalogue as being ‘presently the earliest identified, freely-accessible sales catalogue of microscopical apparatus’. Stevenson says that Palmer was probably the master with whom William Henry Thornthwaite served his apprenticeship (Thornthwaite later formed the optics company of Horne, Thornthwaite and Wood). More information about Edward Palmer and historical makers of microscopes can be found on the microscopist.net website here – http://microscopist.net/

Two lovely illustrations from Palmer’s catalogue, where perhaps some artistic license has been used, are shown below. The first illustration is the appearance of a drop of water as seen through a Stanhope Lens and the second illustration shows apparatus designed to project the image as seen under a microscope – note the very compliant insect posing for its portrait! 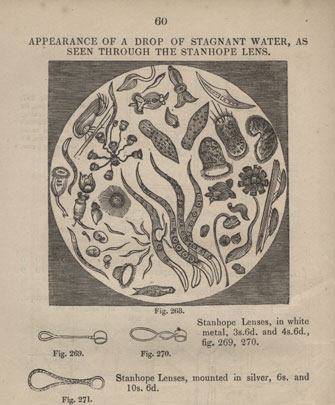 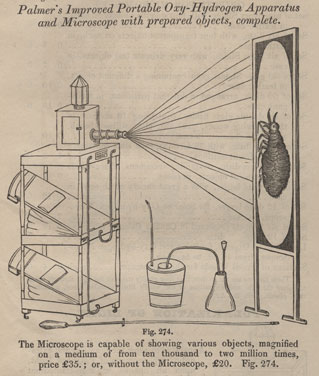 Another interesting company with material in this volume is the London based manufacturer L Casella. In Casella’s advertisements the company describes itself as ‘scientific instrument maker to the Admiralty, the Ordnance, the Board of Trade, the Indian, American and Russian Governments, etc etc’. Casella’s advertisements for an ‘adaptable chamber for experiments in high vacua’, and for a ‘standard evaporimeter are shown below. 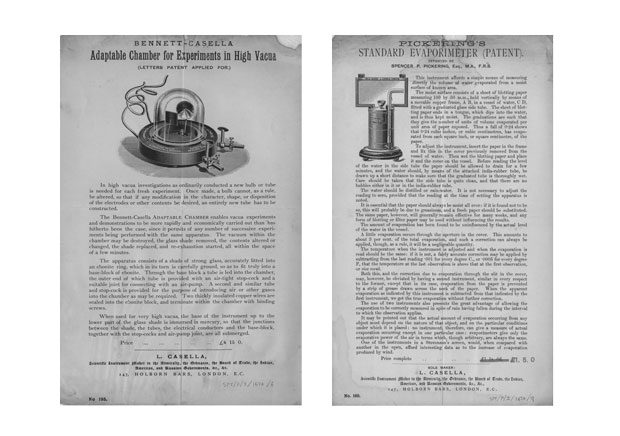 Louis Casella has an entry in the Oxford Dictionary of National Biography which says that he was born in Edinburgh in 1812 and moved to London in 1835 where he was employed by the instrument maker Caesar Tagliabue, who like Casella’s father, had emigrated to Britain from near Como in Italy. In 1838 after Casella married Tagliabue’s daughter, Casella went into partnership with Tagliabue and the firm’s name was changed to Tagliabue and Casella.

Following Tagliabue’s death in 1845, Casella took over the running of the firm and Tagliabue was dropped from the company name in 1848. Casella moved the company from Hatton garden to Holborn Bars in 1872 and the company became most renowned for its thermometers. Casella, who stayed working in the business until late in his life, was a fellow of both the Royal Meteorological Society and the Royal Geographical Society and he was also a member of the Royal Astronomical Society.

The majority of pamphlets and catalogues in the volume date from the 1880s and 1890s and cover a range of interesting British and German authors and manufacturers in the field of scientific instrumentation at a time of rapid development and great innovation in the sector. However, it is the beautiful illustrations amongst the material that are particularly eye-catching such as the anemometers (measure wind speed) and projection apparatus shown below. 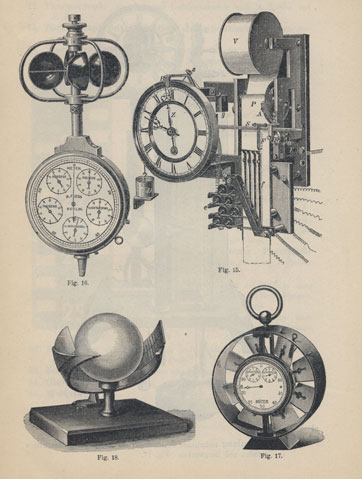 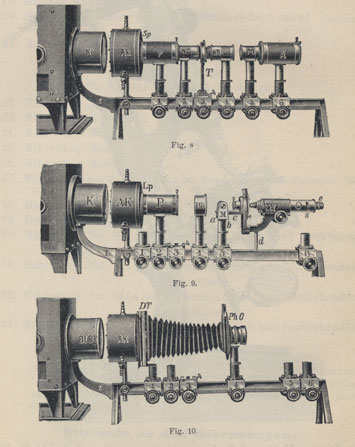 Not everything in the volume comprises published material and there is a lovely manuscript note written by Albert George Dew-Smith, one of the two founders of the Cambridge Scientific Instrument Company in 1881. Dew-Smith was an engineer, photographer and instrument maker who had studied at Trinity College, Cambridge.

Dew-Smith wrote in January 1885 to Professor Sylvanus [sic] P Thompson (the original owner of the pamphlet collection) offering to make him a pair of reading microscopes. The note is shown below. 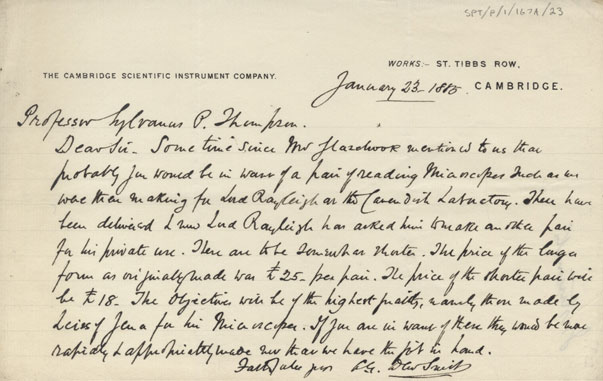 “Dear Sir, some time since Mr Glazebrook [Richard Glazebrook the English physicist who studied physics under James Clerk Maxwell and Lord Rayleigh at the new Cavendish Laboratory] mentioned to us that probably you would be in want of a pair of reading microscopes such as we were then making for Lord Rayleigh at the Cavendish Laboratory. These have been delivered and now Lord Rayleigh has asked to make another pair for his private use. These are to be same such or shorter. The price of the larger form as originally made was £25 per pair. The price of the shorter pair will be £18. The objectives [lenses] will be of the highest quality, namely those made by Zeiss of Jena [Carl Zeiss] for his microscope. If you are in want of these they would be more rapidly and appropriately made now that we have the fit in hand.”

The ‘Instruments Not Electrical II’ volume of pamphlets (archive reference SPT/P/I/167A) will be catalogued at item level during 2017 and will then be available to consult at the IET Archive Centre by appointment.

One thought on “Victorian Instrument Pamphlets (Not Electrical)”