A brief history of the Society of Engineers

In May 1854 Robert Monro Christie and Henry Palfrey Stephenson decided to form a club for the re-union of gentlemen who like themselves, had attended Putney College, one of the earliest educational establishments to teach civil engineering. Putney House, home to Putney College can be seen in the illustration below (1810) from the Journal of the Society of Engineers (1954 centenary address). Christie and Stephenson placed an advert in The Times and eight gentlemen attended the first meeting in a room at Mr Talmadge’s, 221 The Strand, just a few hundred meters in fact from the IET Savoy Place in London.

The Club’s first meeting of 1855 was held in the offices of Mr Christie when the formal business of reading and discussing papers began. A page from the secretary’s book recording this first meeting can be seen below (Archives ref. IIE/SoE/ORG/3/1). Within eighteen months of its foundation the club had 25 members including Sir John Aird, whose firm, John Aird & Company, was the main contractor on the Aswan Dam (on completion the largest masonry dam in the world). At an AGM in December 1857 the club changed its name to the Society of Engineers. At the same AGM it was found that funds were sufficient to justify the committee hiring a room at Exeter Hall (now the site of the Strand Palace Hotel). From 1857 onwards a minute book was adopted and it was decided to print the transactions of the Society. By 1858 membership had reached 107. 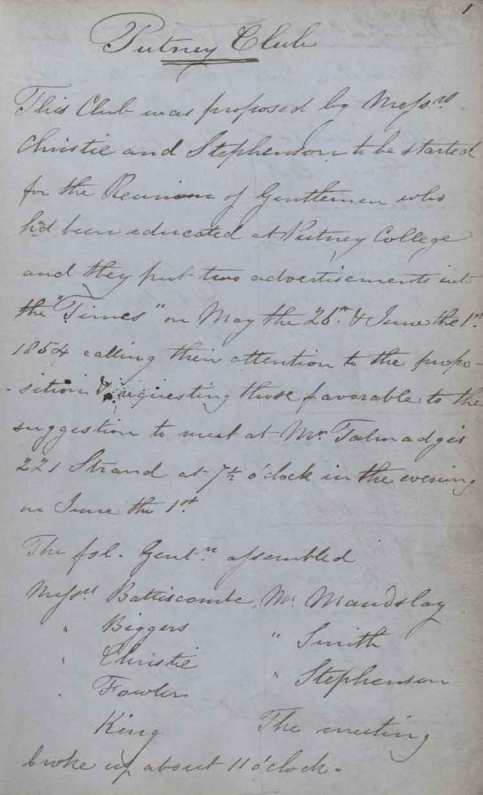 The Society began to hold conversazione (scholarly social gatherings) in 1861 and shortly afterwards visits to works of engineering interest were arranged. The image below shows an extract from a list of visits made by members of the Society of Engineers beginning with ‘B’ (Archives ref. IIE/SoE/EVE/1/1).

The Society’s first honorary members were elected in 1865 and early such figures included the chemist Lord Playfair, civil and structural engineer Sir William Fairbairn, the polymath Sir John Herschel, and engineer and entrepreneur Sir Joseph Whitworth. In ‘a short history of the Society published’ in the journal of the Society in 1941 it is noted that before 1867 students were debarred from access to the Institution of Civil Engineers, which likely contributed to the popularity of the Society of Engineers over the first decade or so of its existence. The Crystal Palace School of Practical Engineering furnished an appreciable number of members to the Society, thanks in part due to Messrs J W and M Wilson, past Presidents of the Society of Engineers and Principles of this School.

The Civil and Mechanical Engineers’ Society

Elsewhere in London a group of pupils and draughtsmen of the marine engineering company, Messrs Ravenhill & Company (Tower Hamlets) decided that they wished to meet periodically to discuss engineering topics. In 1859 they formed the Civil and Mechanical Engineers’ Society. The members first met at the St Francis schoolrooms, Arbour Square, Stepney. The choice of this Society’s name reflected the rapid development of steam engines, boilers, shipbuilding and other machinery, during the first half of last century which had already separated mechanical engineers as a class distinct from civil engineers.

In 1910 the Civil and Mechanical Engineers’ Society and Society of Engineers joined to form the incorporated Society of Engineers. Ackerman was retained as Secretary and remained in post until 1938. Amongst the objectives of the incorporated Society were to disseminate professional knowledge, and the reading, discussion and publication of papers. The Society held a free of charge appointments register and from 1915 a benevolent fund was created. In addition a considerable library was made accessible at the offices of the Society and summaries of new publications and, in later years, reviews of new works were published in the Society’s journal.

The Society of Engineers was one of the first bodies to issue a syllabus and list of examiners in 1912. Before the advent of an option to join the Society via examinations, membership had been restricted to professional engineers who could establish their status by producing evidence of training as engineers, coupled with subsequent experience. In 1955 Graduate Examinations were introduced as one of the qualifications for membership. In the mid-1980s examinations were conducted around the world, mainly in colleges or in association with the British Council. Examinations ceased in March 2002.

An Australian branch of the Society was the first group to establish outside of Britain just before the outbreak of World War II and was inaugurated as a division in 1947. A number of branches were also established in Newcastle-upon-Tyne, Nottingham, Edinburgh and the East of Scotland, Birmingham, Manchester, South Wales and the Bahamas. The picture below shows three Australian division lady members in 1950. From left to right: Mrs Elsie Taylor, managing director of an engineering production company; Mrs F V McKenzie OBE, who established the school of signalling in Sydney; and Mrs Florence M Taylor OBE, Australia’s ‘first female architect and structural engineer’.

The Council also drew up a scheme of association with other engineering societies who, for a subscription, could receive the journal and use the Society’s library.

Several awards were created by the Society of Engineers including the Churchill Medal. Approval for this title was given by Winston Churchill in November 1946 when a deputation from the Society presented him with a certificate of Honorary Fellowship as can be seen in the picture below (Albert E Turner, then President of the Society of Engineers is to Churchill’s left). The Churchill Medal was originally awarded to an individual at the discretion of the Council of the Society, once in alternate even years. The medal winner needed to demonstrate an important contribution to contemporary engineering, an original engineering project or development solely conceived by the nominee and executed under his or her supervision, or a project development to which they had made the major engineering contribution. Nominees had to be nationals of the UK or commonwealth. Previous Churchill Medal winners have included Sir Frank Whittle, Sir Geoffrey de Havilland, and Sir John Fox. Today the IET continues to award a Churchill Medal which recognises a team or individual for outstanding achievements and contributions to engineering and technical advancement in support of military operations.

The Society of Engineers papers include early minutes (1858-1962), constitutional material and press cuttings. Also of particular interest are materials capturing the Society’s application to be included in the second list of nominated bodies of the Engineering Council, and its counter-petition to the Council of Engineering Institutions for a grant of a charter of incorporation.

The Society of Engineers papers (archive reference IIE/SoE), can be viewed at the IET Archive Centre, Savoy Hill House, London, by appointment.

7 thoughts on “A brief history of the Society of Engineers”