EMESCO – the history of an electrical & radio engineering business

George Edward Mortley (1880-1974), an engineer, inventor and musician, owned his own company, G E Mortley and Co in the early part of the 20th century. When Walter Sprague was brought into the business in 1921, the company became G E Mortley, Sprague & Company Limited, known as EMESCO, which expanded rapidly during the Second World War and at its height employed between 80 and 90 people.

A 45-page, previously unpublished, history of the company has just been written and a copy donated to the IET Archives. An electronic version of this history is available to download at the end of this blog.

How Did This History Come About?

George Mortley wrote an account of the early years of his business in the 1940s. This account was published in a series of articles in the company staff magazine called Emesco Forum. George’s son Geoffrey E Mortley (1919-2012), who was Managing Director of the business from 1972-1996 and Chairman from 1978-2002, planned to assemble these articles into a single document for contemporary readership once he had retired. Whilst Geoffrey began this project and indeed wrote the foreword to this history, called Genesis of EMESCO, he was unable to finish due to failing health. It was then Geoffrey’s son, Christopher Mortley who completed the project in 2016.

The photograph below, taken from Genesis of EMESCO, shows the staff of EMESCO leaving for a works outing in 1922. In the back row of the three rows of people shown, Walter Sprague is the first person on the left, and he is standing next to George E Mortley. 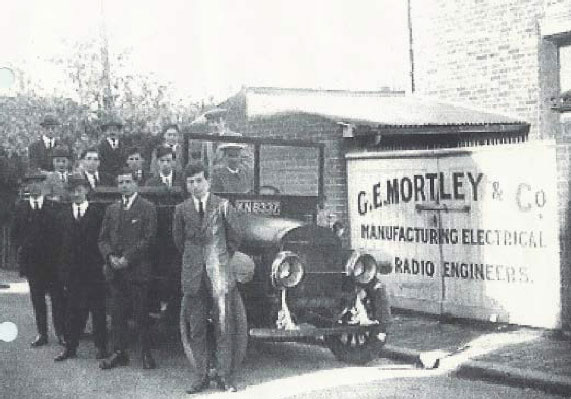 Who Was George E Mortley and What Work Did His Business Undertake?

An extract from George’s obituary in the 12 July 1974 issue of the Kent & Sussex Courier newspaper said the following about George and his company;

“A native of Matfield, Mr Mortley was educated at the village school and apprenticed to a scientific instrument manufacturer. By 1912 he had established in Tunbridge Wells a business of which it was written: “Whilst this firm is scarcely known in its local town, its products exist literally in all parts of the world”.

His early innovations tackled the problems of reducing the weight of the electrical generators which had to be carried on aircraft using radio; and his use of small propeller—driven generators was quickly adopted as standard by the British Government.

In the years between the wars his inventions were used by Trinity House and Marconi’s and on a number of expeditions including the Shackleton and Mawson expeditions.

During the Second World War when he was unable to produce the machines in sufficient quantity they were constructed to his design and specification by Hoover’s and other large companies without any claim being made for royalties.”

Another description of George and his company can be found in his son Geoffrey’s foreword in Genesis of EMESCO.

“My father was not only one of the principal pioneers in the development of amateur radio broadcasting before the advent of the B.B.C. – I believe he was the first amateur radio enthusiast to set up his own local broadcasting station. He broadcast regular musical concerts from our home in Hawkenbury, Tunbridge Wells, in the early twenties, and many people in the area listened in with their first “wireless” and “cat’s whisker” crystal sets. He commenced his own business in 1913 principally to manufacture his own inventions, in particular petrol-gas lighting units. But in 1916 his enthusiasm in the amateur radio field gave him an understanding of the need for relatively high voltage power supplies and his first introduction to the defence industry was to tender for, and supply, streamlined wind-driven generators for mounting on the wings of aircraft. The business was incorporated as a limited company in 1923 and from then on many types of electric motors, generators, inverters, etc. were designed and produced into the 1939-45 war and many years beyond.”

The image below shows Cryals, Matfield, near Tunbridge Wells, Kent where two of George E Mortley’s patented petrol-gas electric light plants were installed in 1913. Each plant was capable of servicing 40 lights.

The history of EMESCO titled, Genesis of EMESCO (archive reference SC MSS 286), can be viewed by clicking on the link below.