Marconi and the Lizard Wireless Station 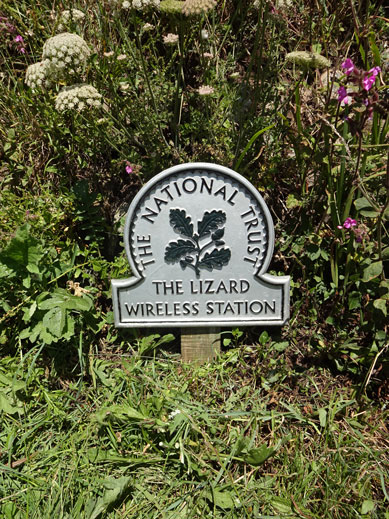 During a recent walk along the coast path in Cornwall I came across the Lizard Wireless Station, now owned by The National Trust, located on the cliffs above Housel Bay. Not only is this one of the oldest surviving wireless stations in the world dating back to the start of 1900 but it is the hut built by Marconi in order to conduct his experiments into long-distance wireless communications. Marconi’s experiments began in January 1901 with a then record-breaking transmission between St Catherine’s in the Isle of Wight and the Lizard Wireless Station, a distance of 186 miles.

My grateful thanks go to John Davies, a National Trust volunteer and guide, who I discovered in the fields near the wireless station carrying out maintenance work, and who kindly opened up the hut 15 minutes early to give me a personal tour and explanation of the history of the station. 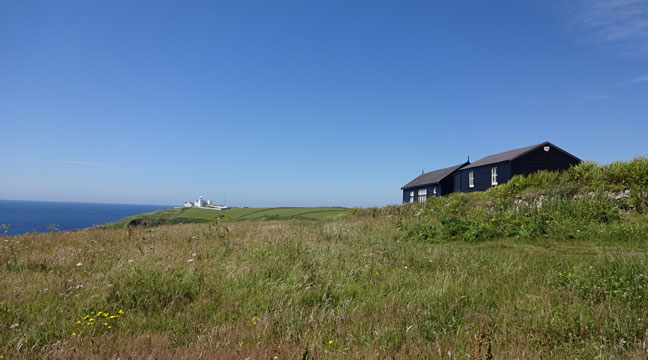 The wireless station was made up of two huts (shown above) together with a 49m high mast and was built in 1900 by the newly formed Marconi Marine Communication Company Limited. The Marconi Company set up this new business to handle sales to the commercial shipping sector and the Lizard Wireless Station was one of 8 of coastal stations built in 1900-1901 to communicate with ships via ship-to-shore wireless telegraphy. Marconi would lease wireless telegraphy equipment to ship-owners and also provide operators on the ships that installed its equipment.

John Davies tells the story that messages could be sent from the Lizard Wireless Station across the Atlantic to New York by passing a message using the Marconi equipment from ship to ship. A chart showing all the shipping schedules at one particular point in time hangs on the wall in one of the huts.

The plaque below, found outside the wireless station, and which is dedicated to Guglielmo Marconi, was presented in 1955 by the Marconi Wireless Telegraph Company Limited (then based in Chelmsford, Essex) and says; 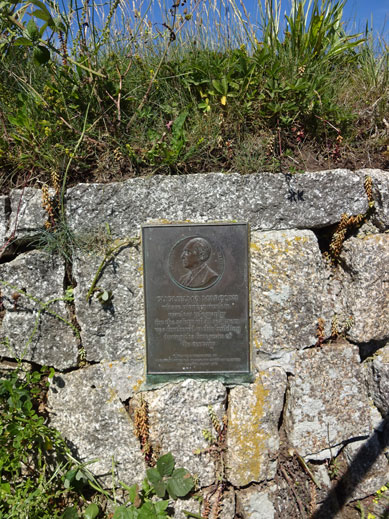 According to the book, ‘Marconi at the Lizard: The Story of Communication Systems at Housel Bay’, by Courtney Rowe (published in 2001, reprinted 2016) there were 3 reasons for choosing the Housel Bay location for the site of the wireless station;

The station operated primarily on a frequency on 500 kHz (wavelength of 600m) and its range in daylight hours was around 160km. Its call sign was LD and it continued as a Marconi station until 1908. The Post Office took over responsibility for the station in 1908 and changed the call sign to GLD, with Marconi staff providing assistance until 1911.

Shortly before midnight on 18 April 1910, the station was the first coastal station under Post Office management to handle a distress call under the newly adopted SOS signal. The Minnehaha owned by The Atlantic Transport Company, and carrying passengers and cattle, ran aground off the Isles of Scilly. The coastguard and Lloyds of London (insurance market) were notified and tugs from Falmouth soon reached her and were able to refloat the ship.

The station closed in 1913 when a newly developed station was opened at St Just, named Lands End Radio, and this new station took over the GLD call-sign.

A photograph from inside the wireless station is shown below; 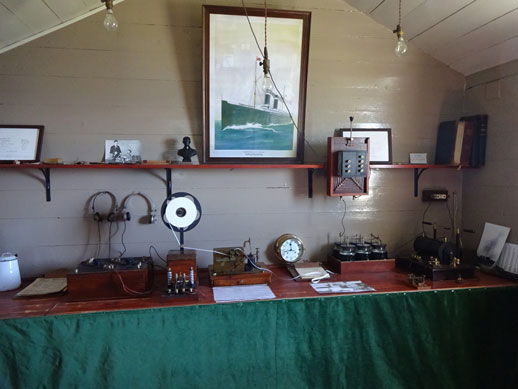 In the right hand corner of the desk above, against the wall, is a replica of the original induction coil and spark transmitter, built in the workshops of The Telegraph Museum, Porthcurno, for the National Trust. To the left of the transmitter is its condenser made up of a bank of Leyden jars, and the associated ‘jigger’ is in the box above.

The jigger was a circuit component developed by Marconi which acted as a filter in transmitters and receivers and which could be tuned so that each receiver would receive only from the transmitter of choice. This overcame the problem whereby the signals of transmitters operating nearby would be heard in all receivers and the messages would be mixed together and impossible to disentangle.

For anyone wishing to visit the Lizard Wireless Station and get a particularly intimate experience, the western of the two huts that comprise the station is available to book as a National Trust holiday cottage called Wireless Cottage.

The National Trust also initiated its first ever sound artist residency last year that was inspired by Marconi’s Wireless Telegraph Station and the Lizard Peninsula where it is situated. The National Trust commissioned musician and producer Joe Acheson to create a composition inspired by the history and nature of Cornwall’s Lizard Peninsula and the wireless station. Joe’s website about the experience including a link to his article about the residency, written for the British Library’s sound & vision blog, plus options to download the resultant audio track, can be found here – http://joeacheson.com/marconi-the-lizard/.