The above image shows the cover of a booklet titled, ‘Electric illumination: an account of the principles, applications and development of electric lighting‘, written by W T O’Dea BSc AMIEE for the Board of Education and the Science Museum in 1936. The publication of this booklet was timed to coincide with the Science Museum’s ‘Electric Illumination’ exhibition which opened 15 December 1936. Inside the booklet is an invitation to the opening ceremony, a programme for the opening ceremony, and a summary sheet for the exhibition.

The organising committee for the exhibition involved many members of the Institution of Electrical Engineers (IEE) and the opening ceremony was due to be attended by noted individuals including Lord Rutherford of Nelson (Cavendish Professor of Physics), H T Young (President of the IEE), and Leslie Hore-Belisha MP (unable to attend on the day due to a family bereavement). Hore-Belisha (1893-1957) was at that time Minister of Transport (1934-1937) and his name is still widely associated in the UK with the amber ‘Belisha beacons’ which were installed at pedestrian crossings while he was Minister for Transport. Hore-Belisha’s Road Traffic Act 1934 also introduced the speed limit of 30 miles per hour for motor cars in built-up areas. An invitation to the opening ceremony is shown below.

One reason for the Science Museum putting on this exhibition at this particular time was that there had been great advances in illumination techniques in the few years preceding the exhibition, particularly in the field of electric illumination. Prominently displayed at the exhibition were electric discharge lamps, then the most modern form of lighting, and it included a series of demonstrations to illustrate the phenomenon of luminescence. The summary leaflet for the exhibition said the following;

“Recent research has resulted in the conversion of part of the invisible ultra-violet radiation of a discharge lamp into visible light by using coatings of luminescent powders: the increase in efficiency is in some cases remarkable, and a range of powders and substances may be seen emanating light, although the ultra-violet rays which are exciting them are invisible to the eye.”

The book, ‘Science for the Nation: Perspectives on the History of the Science Museum’, edited by P Morris, and published in 2010, describes a visit to the exhibition on the day of the press launch by a correspondent from The Times;

“The reporter enjoyed himself amongst the display. He observed scale models of London’s Bush House and St Paul’s Cathedral, showing floodlighting schemes at the push of a button. He examined the lighting of an aerodrome required for night flying. He saw the effects of coloured lights on flowers, textiles and pictures, and decided which sort of lamps provided the most pleasing ‘look’ in a domestic room.”

Morris’s book also mentions W T O’Dea, author of the ‘electric illumination’ booklet, and who was a curator for the exhibition.

“William O’Dea, an ambitious young Assistant Keeper with a background in electrical engineering five years into his tenure at the Museum [curated the exhibition with] the staff at the Electric Lamp Manufacturers Association (ELMA), a trade cartel controlling most of the British lamp supply network.”

The ‘Electric Illumination’ booklet has two main sections covering ‘General principles’ and ‘Practical lighting systems and calculations’. In this second section several categories of lighting are examined including floodlighting and architectural lighting. The floodlighting section shows the lovely image below of the effect of isolation in floodlighting. 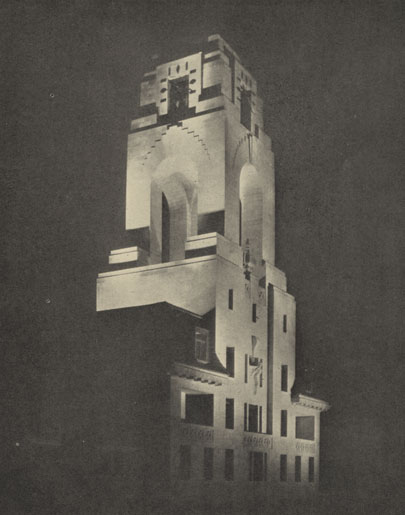 It is interesting to compare this photograph with another photograph of a floodlit building taken around the same period (May 1935), this time from the IET Archive collections. The image below shows Shell Mex House in London taken from the Embankment (from the British Thomson-Houston collection, reference NAEST 74). The building was floodlit using BTH’s lamps which had been installed in 1935. 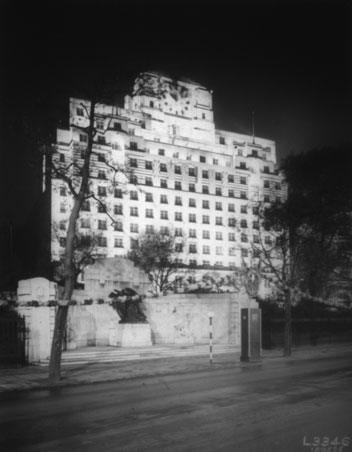 Another image in the ‘Electric Illumination’ booklet, this time in the architectural lighting category, shows the lounge in the Savoy Hotel London.

Whilst we don’t have an image in the IET Archive collections of the Savoy Hotel lounge around this time, we do have an image of the lounge in the Royal Hotel in Cardiff taken a little earlier in February 1932, with which we can compare the Savoy Hotel image. The temporary lighting shown was installed by BTH in February 1932 and I will leave it to the reader to decide, quality of photographs aside, how much the quality of lighting had improved between 1932 and 1935! 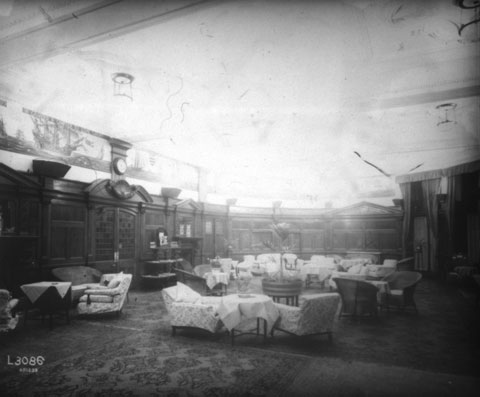 The ‘Electric Illumination’ booklet (reference NAEST 45/540), together with its inserts, can be consulted at the IET Archives, Savoy Hill House, by appointment. Alternatively, a copy of the booklet, without inserts, is available to IET members and ‘library only members’, to view or loan via the IET Library at Savoy Place.