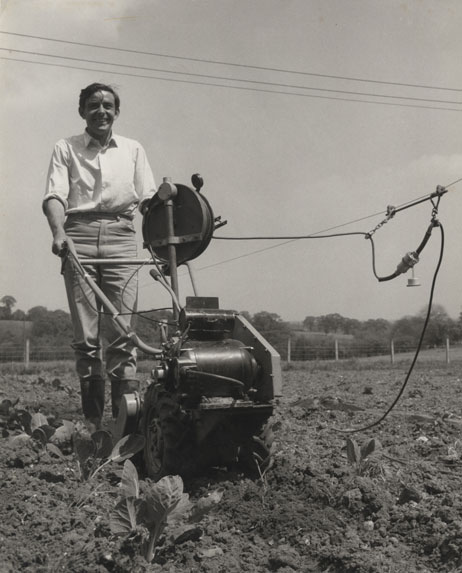 The IET Archives recently received a donation of reports and papers related to the work of the Electrical Research Association (ERA) at its Rural Electrification Section in the 1950s and 1960s. The photograph above from this collection shows a member of ERA staff testing an electric cultivator circa 1960-62.

The donor of this collection, to whom we are very grateful, was Adam Cromarty, who although on the payroll of the Electricity Council worked for ERA at its Shinfield Field Station in the late 1950s / 1960s on various projects related to the use of electricity on farms, particularly a Dairy Heat Pump (DHP) project.

After the Second World War the Government wanted to promote agricultural production that included rural electrification and ERA quickly took up the challenge by establishing a Rural Electrification Section under E.W. Golding that lead to the Field Station being built at Shinfield on University of Reading Land. The Field Station was run by Peter Finn-Kelsey and one simple and cost effective development by ERA was the ‘transformer on a pole’ idea that cut the cost of getting power to remote farms. The ERA Field Station at Shinfield was closed in 1966.

The photograph below shows Peter Finn-Kelsey and V M Owen (authors of the 1958 technical report titled, ‘an all-electric multipurpose farm drier’) standing by the farm drier circa 1960.

This next photograph shows the difference between a high-quality (light coloured) dried bale that had been through a farm drier compared with hay from the same field dried by traditional methods.

Adam was employed at Shinfield to monitor ERA’s Dairy Heat Pump project in 1959 at the time that the unit had been redesigned (the original DHP work had been proposed around 1949). The first and second DHP, designed for cooling milk, were the first scientifically researched units in the UK. At that time many dairy farmers still relied on placing milk churns in local streams which resulted in souring of milk during summer months.

It was also a help to the staff at Shinfield that the National Institute for Research in Dairying (NIRD) was located nearby. The NIRD was the recognised centre where new milk cooling equipment was tested to comply with legal requirements before it could be sold to UK dairy farmers.

Unfortunately the various delays in advancing the work meant that by 1960 milk collection and distribution in churns was rapidly being phased out in favour of bulk milk collection, organised by the Milk Marketing Board of England & Wales, so the DHP project was run down. However, the technology was then used to develop a hot water storage cylinder / heat exchanger that could be added to conventional bulk storage milk tanks. Whilst some work of this type had been undertaken at American universities in the 1950s the work done by the ERA on Berkshire farms and prototype testing at the NIRD was unique.

When BEAIRA was founded it was funded jointly by the government’s Department of Scientific and Industrial Research and from subscription payments from its member companies. It was designed to facilitate co-operative electrical research in the UK, allowing manufacturers, suppliers and larger users of electricity to make use of its research and technological innovation. BEAIRA initially received a government grant for 5 years but from 1926 the Government’s contribution reduced significantly.

As the Association grew and required more space, it built a new laboratory in Perivale in 1936 and during the Second World War ERA gave direct assistance to the war effort, with the Ministry of Labour calling it an ‘essential undertaking’. Wartime activities included work on the development of radar and mine detection equipment.

In 1957 the headquarters of ERA were opened in Leatherhead, Surrey, and ERA’s existing staff and work transferred from its previous home at the Perivale laboratories to the new 18-acre campus which included new laboratories and offices. 1969 saw a major change for ERA when it became the first privatised research association, then able to derive its income from single clients and multi-client projects. ERA’s name changed to ERA Technology Limited in 1979.

In January 2001 the ERA organisation was transferred to a new trading company while the original company, limited by guarantee was renamed the ERA Foundation. The commercial company ERA Technology was sold to Cobham plc in September 2003 whilst the ERA Foundation continues to this day, with its business address located at the IET’s Savoy Place in London.

Anyone interested in reading more of Adam’s reminiscences and consulting these ERA reports, most of which were not published and relate to the work of Section W (rural electrification), can consult these papers at the IET Archives by appointment (the collection has an archive reference of SC MSS 290).