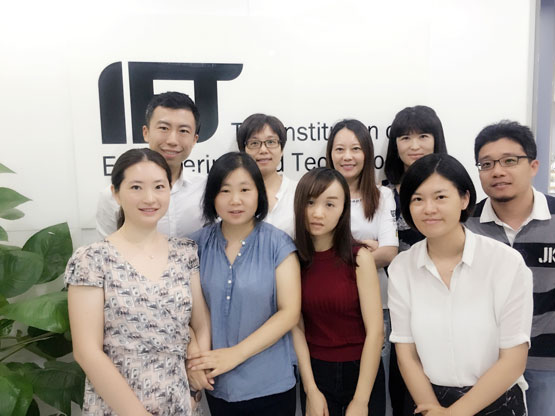 The photograph above, taken in August this year, shows the current IET team in its China representative office, located in Beijing. The office which opened in 2005 has since October 2006 been based within the China Merchants Tower, one of the most prestigious commercial buildings in the Beijing Central Business District. However, very few people outside of the IET, and probably few within the IET, realise that the IET’s representation in China and Hong Kong goes back over 100 years to 1914.

The IET’s first presence in China and Hong Kong was through its predecessor, the Institution of Electrical Engineers (IEE), which had a Local Centre in Hong Kong from 1914 to around 1921. Minutes from the meeting of the IEE Council on 2 April 1914 show that the Council agreed to the setting up of a Hong Kong Local Centre following a petition. The petition from members resident in Hong Kong was enclosed with a letter from the Honorary Secretary of the University of Hong Kong, which was dated 22 January 1914.

After the Hong Kong Centre had closed, a China Local Centre (based in Shanghai) was sanctioned by the IEE Council in 1923. This Local Centre in Shanghai remained open through many difficulties, until it finally closed in 1950.

Whilst we do not have any photographs in the IET Archives from the China Local Centre from this 1923-1950 period, we do have an amazing file of correspondence that throws up some interesting facts, and sheds light on the difficulties faced by members in Shanghai, during a period of great upheaval in Chinese history.

China Local Centre – Experiences during and after World War II 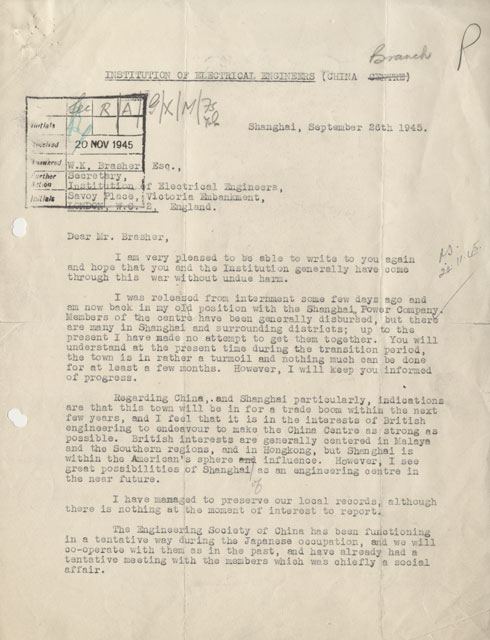 The letter above was written by J A McKinney, the China Local Centre Honorary Secretary and Treasurer, on 26 September 1945. It outlines the difficulties faced by members in Shanghai during and after the Second Sino-Japanese War which ended 2 September 1945. During this war, the Chinese-controlled parts of Shanghai fell after the 1937 Battle of Shanghai (known in China as the Battle of Songhu). The foreign concessions, which remained largely intact, entered what became known as the ‘Solitary Island’ period (an enclave of prosperity surrounded by war zones). However, during World War II, the British, American and Dutch nationals slowly lost their privileges and had to wear the letters B, A or N when walking in public places and finally they were interned in concentration camps in 1943. The whole of Shanghai remained under Japanese occupation until the surrender of Japan in 1945.

In McKinney’s letter, which he sent to the IEE Secretary, W K Brasher, in London, he says;

“I was released from internment some few days ago and am now back in my old position with the Shanghai Power Company. Members of the Centre have been generally dispersed, but there are many in Shanghai and surrounding districts; up to the present I have made no attempt to get them together. You will understand at the present time during the transition period, the town is rather in turmoil and nothing much can be done for at least a few months. However, I will keep you informed of progress.”

McKinney wrote another letter to Brasher, dated 7 January 1946 after Brasher had responded in which he said;

“I note therefrom that the China Centre is now known as the China Branch, and fully appreciate the reasons for the change. Many of our old members have permanently or temporarily left China since the end of the war. A considerable number were run down and in bad health and it was necessary for a recuperation period before resuming duty in this country. However, a certain number of new members have arrived in Shanghai and it is anticipated that there will be a large increase in the near future, as the town shows signs of considerable industrial and commercial activity when once the reorganisation period has been passed.

It is estimated at the present time that there are about 60 to 70 members resident here, but there are a large number of potential members, particularly of Chinese nationality, who will in due course wish to join the Institution. The influx of engineers has been stimulated by the evident desire of the authorities to build up industrial activities. We were fortunate that the war ended when it did, as during the two months prior to the surrender bombing was being intensified, but the end of the trouble came before any considerable damage was done.”

Closure of the Centre in Shanghai

Much of the correspondence between Shanghai and London from 1945 to 1949 covers the subjects of member subscriptions, currency difficulties, and problem in obtaining the IEE’s journals, as well as trying to instigate a program of branch meetings.

On 27 May 1949 Shanghai came under Communist Party of China control and many foreign firms began moving their office from Shanghai to Hong Kong. McKinney reported in a letter of 5 October 1949, that he hadn’t collected any dues since the “liberation of Shanghai” [May 1949] and that;

“the little cash we held in our branch account in Gold Yuan has disappeared. The present People’s money was set up in a ratio of $200,000 Gold Yuan to one People’s dollar. It is not certain when I will be able to leave Shanghai but I do not anticipate that it will be before next spring.”

The last letter in the file from McKinney is dated 29 March 1950 and gives his final personal overview of the situation in Shanghai.

McKinney could hardly have foreseen that a ‘long time’ would turn out to be 55 years before the IET would once again have a representative office in China. Also these records, at face value just a set of the IEE’s overseas branch administrative records, once again demonstrate the broad range of social and historical contextual information that can be found ‘tucked away’ in seemingly unrelated files.