Methods of Lighting in Ancient Japan 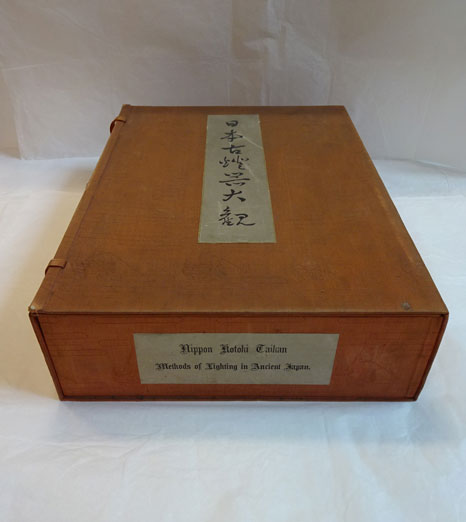 The ‘publication’ shown above was produced by the Japanese Illuminating Engineering Society in December 1930, and is titled Nippon Kotoki Taikan: Methods of Lighting in Ancient Japan. The work comprises a decorative presentation box (fabric on wood) with the title of the work on the outside, and within there are individual sheets showing over 600 historic Japanese objects and printed works, many located in Japanese collections at that time, and related to the history of lighting in Japan.

Each separate sheet includes an image of a specific item or items with a description in both English and Japanese. Accompanying the prints is a booklet giving the background to the publication also written in both English and Japanese. The booklet explains that the Japanese Illuminating Engineering Society collected materials and historic information over a year and a half beginning March 1929, and that project resulted in this specific output. Their project was supported by the Electrical Association of Japan as well as electric supply enterprises. A typical sheet from within the box (showing item 582) is replicated below and depicts a drawn work, “Bura Chochin no Zu – a lady carrying a street lantern, by Utamaro, circa 1800, from the Y. Mikami Collection, Kyoto” 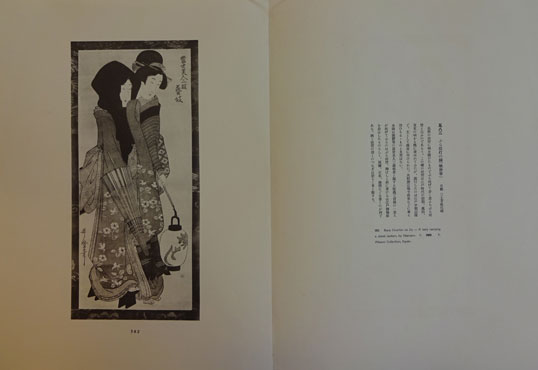 Examples of the object images, include a globe-fish lantern and courtesan’s lantern, are shown below.

The images also include photographs of items taken in their surroundings including the following images of a lantern lighthouse and a lantern group taken at a shrine ceremony. 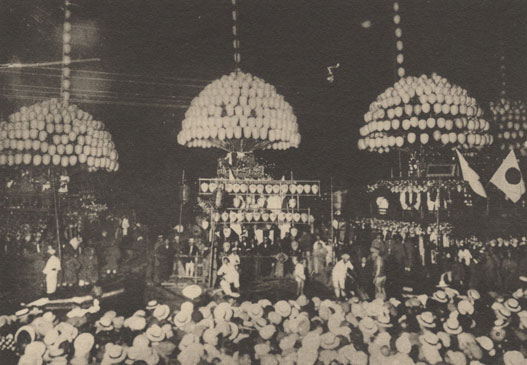 Item 496. “Atsuta Jingu Sairei Makiwara Bune – The lantern groups at the Atsuta Shrine ceremony, held on the 5th of May every year.”

How did this Item Come into the Possession of the IET

The provenance of this item is explained in a letter enclosed within the box which was sent to the Secretary of the IEE. The letter written by the Dowager Lady Swaythling, and dated 22 October 1936, says;

“Dear Sir, a Japanese Professor Mr C Matsuda of the Kyoto Imperial University gave me this remarkable collection of prints – all concerned with lighting from the earliest ages in Japan to more modern times. A few of the prints have been lent by me to the EAW [Electrical Association of Women] for exhibition and are now in the box again. I meant to leave this box to the Institution of Electrical Engineers at my death but feel it should not be shut away. Would you please ask the President & Council if they would care to have this collection. If so could it be listed as from, “The Dowager Lady Swaythling by the kindness of Professor C Matsuda of the Kyoto Imperial University”, or something to that effect. Yours truly Gladys Swaythling.”

The original letter, dated 25 December 1931, from Professor Matsuda to Lady Swaythling, written on board the ship MS Yasukuni Maru (launched in 1930) is shown below. It is pasted into the inside of the box. It includes the dedication, “in commemoration of the everlasting happy memory he has enjoyed during the voyage on board Yasukuni Maru from his mother country to Europe.”

An interesting footnote to this lovely donation by Lady Swaythling, whose personal papers are held by the University of Southampton, is that the papers of the Electrical Association of Women, of which Lady Swaythling was President (1938-1957), are also held in the IET Archives.