The IEE Social Club was formed circa 1938 for the staff at the IEE’s Savoy Place in London and it held its first Annual Dinner in December 1938. The President of the IEE Social Club in the 1950s was William Kenneth Brasher, Secretary of the IEE from 1939 to 1962, and he was supported by three Vice Presidents, plus 12 Officers and Committee Members, including a Club Steward!

The Club produced its own journal called the IEE Social Club Bulletin that it published seasonally (25th issue was Christmas 1954), and it also produced occasional short newsletters. In the IET Archives we hold a number of issues of the Bulletin and also several newsletters from the 1950s, many of which have lovely illustrations on the cover and ‘cartoon-style’ drawings inside. One such cover, from the 1953 Christmas issue, is shown above, and another cover from the 1954 spring issue is shown below.

The issues of the Bulletin that we hold in the archives were possibly those belonging to John D. St Aubyn, whose name is written at the top of several covers. J. D. St Aubyn was the Chairman of the IEE Staff Social Club for the 1957/58 and 1958/59 sessions and we also know that he became engaged to Margaret Burnikell as this is announced in the personal column of the 1958 Christmas issue! What happened to John St Aubyn, well he went on to become the IEE’s Editor-in-Chief, a position he held for 30 years, before becoming an editorial consultant, and then retiring in 1996. John had a background in physics and was engaged in radar work with the British Army during WWII. After the war, on completing his degree course, he was for a time with Marconi Instruments, before joining the IEE. This insight into his life is mentioned in the book for which he was a joint editor, Uninterruptible Power Supplies (Energy Engineering), published by the IEE in 1992. 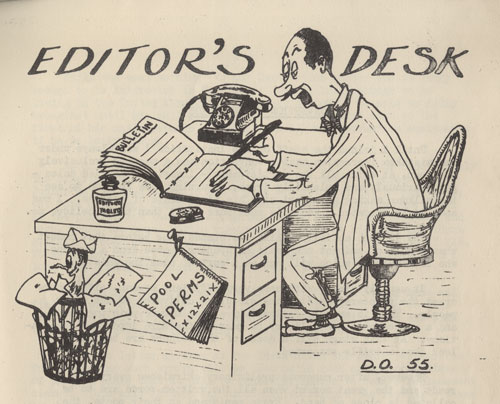 The Bulletin is quite unusual for a Social Club publication in that in addition to social news, it contains a number of quite lengthy articles and stories, with many of the writers attempting to be humorous, such as J R Lansley’s 1954 story, ‘a forgotten memoir of Sherlock Holmes or with knife and fork in darkest Paddington’ or the series of how-it-works articles about IEE departments, for example, ‘how it works III – The Education Department’.

Humour doesn’t always translate well across time, and what might be deemed funny in one time context can often be deemed offensive at a different point in time in another context, and indeed some of the humour is a little risqué and ‘of its time’. Having said this, the Bulletin was not a publication with articles just submitted by men, and it appears to have had many contributors who were women, not just a token occasional author. To illustrate the humour of the publication, one such article from a woman contributor, extracted from the 1954 summer issue, and titled, ‘Wanted’, is reproduced below. It says many things about the social context of the 1950s, but hopefully no readers of this blog will be too upset by its content!

“Has anyone yet noticed the severe and, as far as the weaker sex is concerned, most depressing lack of unattached and still-eligible males loafing around the IEE? Whilst scanning the column headed, ‘departures’ in a now obsolete Bulletin, I was hardly surprised to read that a large number of les femmes fatales were departing – apparently giving up the chase and seeking fresh and, we earnestly hope, more fruitful fields. After all, what is there in working life if every visibly male (of a passable age) is darn well hitched – and therefore hors de combat? In fact reference was made in the afore-mentioned rag [Bulletin] to the Bachelors’ Society, but for the life of me I can’t think off-hand of any likely members, except the obvious stalwarts, who might just as well become Honorary Members!

Since entering this mausoleum as a member of staff (quite distinct in more ways than one from a Member of the Institution) I have found quite a few doors of which I have never crossed the threshold – who knows, perhaps some shy would-be deceiver is lurking within. I may add that I resorted to the ruse of getting some ‘respectable’, who is allowed to enter these private sanctuaries, to give me the gen [knowledge] on the occupants therein, but no go! Funny how the valiant and stronger sex stand staunchly together against the barbed and unsympathetic arrows of the gentler!

The typists, in general, support the plan of large-scale importation of these much desired ‘objects d’art’, and will leave no stone unturned in gaining this end. All the time spent in painting and powdering would not then be wasted – but at the moment this glamourisation falls on stony ground. (The ground ain’t all that stony, but the competition with the little woman is much too overpowering and it is necessary to withdraw gracefully after two or three attempts to stun).

Surely some of the hopeful, young, and I hope unmarried, aspirants who regularly fail the Institution exam, could be co-opted to act as pencil sharpeners or index-strip turners because of their failure to reach high-voltage levels, the IEE would then happily for many, become the I.I. I.

The more factual articles cover a wide variety of subjects including a series of ‘walks after lunch’ (in the vicinity of Savoy Place), and reports of visits, such as the 1956 ‘visit to Waterloo Station signal box’. Other articles include the ‘to be expected’ details of births, marriages, deaths, and IEE joiners and leavers. The illustration below preceded details of IEE joiners and leavers in the 1956 summer issue.

For anyone concerned that there were no recipes in the Bulletin, fear not, and if you were wondering what to do with your surplus lard, here is a recipe for ‘Leicester Cake Slab’ from the 1953 Christmas Bulletin.

“Rub the fat into the flour. Add the remainder of the dry ingredients. Mix in the beaten eggs and then then add the milk sparingly until the mixture just drops off the spoon. Cook in a meat tin. Regulo no.4 for about 1½ hours in the middle of the oven.”

For anyone wishing to study office life in the 1950s, or who is short of a recipe for potato and cheese fritters, then the Bulletin can be viewed in the IET Archives by appointment.