Naming Your Child After an Influential Teacher! 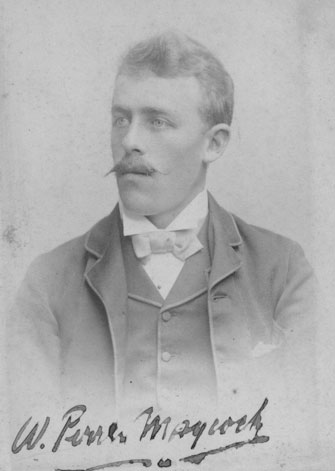 The letter, which had been sent to Professor Silvanus P Thompson, gives an interesting insight into the high regard held for Professor Thompson by his former pupil William Perren Maycock. The letter was found in a book written by William Perren Maycock which was part of S P Thompson’s ‘study collection’ of books and which is now held in the IET Library collections. The book in which the letter was found was William Perren Maycock’s ‘Electric Lighting and Power Distribution: an Elementary Manual of Electrical Engineering, Suitable for Students Preparing for the Elementary and Ordinary Grade Examinations of the City and Guilds of London Institute’, (2nd edition, published in 1894). 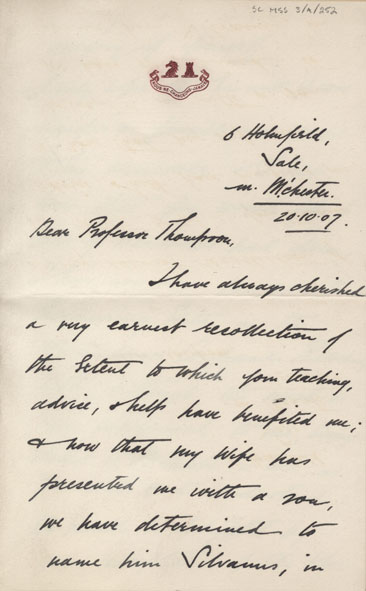 The transcript of the letter (image of the first page is shown above) is as follows (apologies to Mancunians for the disparaging remark within the letter about that great city);

“Dear Professor Thompson, I have always cherished a very earnest recollection of the extent to which your teaching, advice, & help have benefitted me; & now that my wife has presented me with a son, we have determined to name him Silvanus, in memory of yourself. I only hope that he will prove – as far as possible – a credit to his namesake; & I felt sure that you would like to hear of what we had done. I have now been for some time Engineering Editor in the Westinghouse Companies Publishing Department; & though the work is very congenial to me, being exiled to Manchester is not, as you will quite understand. We should be delighted by your acceptance of the photo I send herewith [no longer present] – taken from my study window. I am on the right & my wife is in the middle. Trusting you are well, believe me dear Professor, yours sincerely, W Perren Maycock.”

We know a great deal about the writing style and life of William Perren Maycock, through an obituary published in the Journal of the Institution of Electrical Engineers in 1919 (vol.57 issue 285). That obituary, which also sheds light upon the thoughts and views of the obituary writer, is reproduced below.

“William Perren Maycock died on the 29th June 1918, at the comparatively early age of 53, and his death has left a gap in the ranks of electrical engineers which it will be difficult to fill. As a writer and teacher he made for himself a notable position, addressing himself mainly to the very large class of ambitious and industrious youths who are fighting their way upwards from very modest beginnings to positions of responsibility and prominence. As he himself had started life as an ordinary apprentice in the works of Messrs Fuller & Son, telegraph and electric light engineers, at Bow, where he remained seven years, he had a clear understanding of the difficulties which hamper the efforts of a boy who has not had a proper grounding in scientific principles and mathematics, and who has to acquire technical knowledge from books, with little or no aid from an instructor. To such a one the ordinary textbook affords little help. Shut out from lectures and laboratory experience, he finds the descriptive matter inadequate and often unintelligible, while the mathematics is a stumbling-block rather than a help. He has never acquired the faculty of converting a formula into a mental image of complex and antagonistic forces, and derives no insight from it. What he craves for are diagrams and word pictures that cover the whole ground and call for little or no previous knowledge. In this kind of writing Mr Maycock was preeminent. He had the faculty of seizing upon the main principles of a problem and putting it in the clearest light. He did not, however, confine himself to this. Every detail was dealt with in the most painstaking manner, always keeping in mind the deficiencies and shortcomings of the reader, and thinking no trouble too great if it ensured his understanding of the subject. At the same time Mr Maycock was never prolix. He had a happy knack of hitting upon the right word, and of finding brilliant illustrations and analogies to enforce his meaning.

His own education had been liberal, first at the Reigate Grammar School, and later at Croydon at the Whitgift Grammar School, an ancient foundation which has turned out many notable scholars; Mr Maycock afterwards taught electricity and magnetism for five years at the school. During his apprenticeship he attended the evening classes at the Finsbury Technical College under Professors Ayrton and Silvanus Thompson. His education did not, however, end with his college days. In the nineties electrical engineering was advancing rapidly, and Mr Maycock kept himself abreast of every movement. He was obliged to be thorough, for it was impossible to write with the clarity to which he attained without having a complete mastery of the subject. Further, his knowledge was not merely academic, for he had plenty of practical experience. From 1903 to 1908 he was with the British Westinghouse Electric and Manufacturing Company, Ltd, and since 1911 he had been associated with Messrs A P Lundberg & Sons, for whom he prepared a series of handbooks. He was also for a short time connected with the Acme Electrical Works. His writing and teaching were largely done in his spare time, his teaching including classes in the South-Western, the Borough, and Croydon Polytechnics and work for the International Correspondence College, in each of which he was highly successful in interesting and guiding his pupils.

His books have had a wide circulation and include, the following; “Electric Lighting and Power Distribution”; “A First Book of Electricity and Magnetism”; “Alternating Current Work”; “Electric Light Fitting, Switches, and Lamps”; “Electric Wiring Tables”; “Electric Wiring Diagrams”; “Electric Circuit Theory and Calculations”; “Continuous Current Motor and Control Systems”; and a small book on electric motors. Besides these he contributed many papers to the press. Mr Maycock was a man of very genial disposition, with a keen sense of humour, a characteristic that was very evident in his contributions to the technical press, and which he often employed with good effect in his textbooks to stimulate the interest of his readers. In 1905 he married Miss Florence Marion Hart, of Croydon, who with their two boys, aged respectively eleven and eight years, survives him. He was elected an Associate of the Institution [IEE] in 1886 and a Member in 1891.”

For those interested in consulting one of William Perren Maycock’s publications, many of them can be found within the IET Library collections