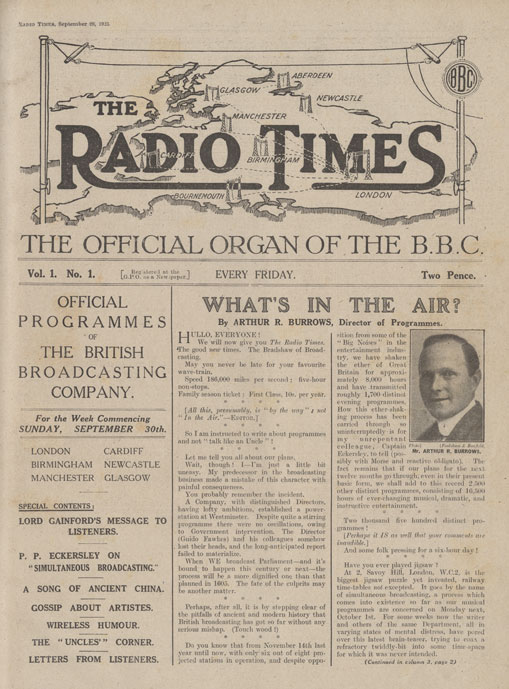 The image above shows the cover of the first issue of the Radio Times that was published 28 September 1923. We have this issue and other ‘special’ issues of the Radio Times, as well as some other BBC related material, as a result of a recent donation of papers from the family of T. R. Warner. T. R. Warner was in charge of advertisement copy and blocks from the first issue of Radio Times in September 1923 until his retirement from BBC Publications in August 1959.

In 1923 T. R. Warner was working for the publisher of the Radio Times, George Newnes, but he was eventually head-hunted by the BBC, joining them on 1 January 1927, at the BBC’s Savoy Hill complex (comprising parts of the buildings known today as Savoy Place and Savoy Hill House). The final edition on which he worked was published on 7 August 1959, although he worked for another 2 years part-time before finishing completely in 1961.

Upon his official retirement in 1959, T. R. Warner was presented with the first and last issues of the Radio Times on which he worked which were bound together in a commemorative binding with the following dedication;

One of the other issues of the Radio Times in this collection is its ‘21st birthday’ edition from 29 September 1944 which mentions T.R. Warner in an article written by Charles Tristram (part of the editorial staff of the Radio Times since its first issue).

“It has been a far cry from the programmes of 2LO [the BBC transmitter that can now be seen in the Information Age gallery at the Science Museum] in the good old Savoy Hill days to the two programmes of today. Colleagues have come, colleagues have gone (some, alas! to be seen no more). Broadcasting stations have arisen and then disappeared; familiar names have vanished from the programmes to be replaced by others now as familiar. Of the original staff of twenty-one years ago only one other remains today – T. R. Warner, of the advertising department, who (unlike some advertising men I have known) has always realised that there is something of interest in a journal besides the advertisements!”

The cover of this 1944 issue of the Radio Times is shown below, and a photograph of ‘Savoy Hill’ (the part known as Savoy Hill House today), can be seen in the top right-hand corner of the page.

T. R. Warner had also received a personal letter from the BBC’s Director General, Ian Jacob, congratulating him on 25 years’ service in June 1954 and a further letter of appreciation in 1959 upon his retirement, this time from the Director of News and Current Affairs, Hugh Carleton Green, who was shortly to become the new BBC Director General – letter shown below.

History of the Radio Times

The Radio Times was originally a joint-venture between the BBC and the publisher George Newnes Ltd, which printed and distributed the magazine. In 1925 the BBC took over editorial control of the Radio Times and in 1937 it took the whole operation in-house. At first the Radio Times included only radio listings, but by November 1936, with the introduction of the first 405-line high-definition television service, the Radio Times became the world’s first television listings magazine.

Within this collection of papers, in addition to commemorative editions of the Radio Times, there are also two commemorative editions of the BBC publication London Calling. One edition is from May 1953 celebrating the coronation of Queen Elizabeth II, and the other edition is from December 1953 which celebrates 21 years of BBC Overseas Broadcasting (cover shown below). 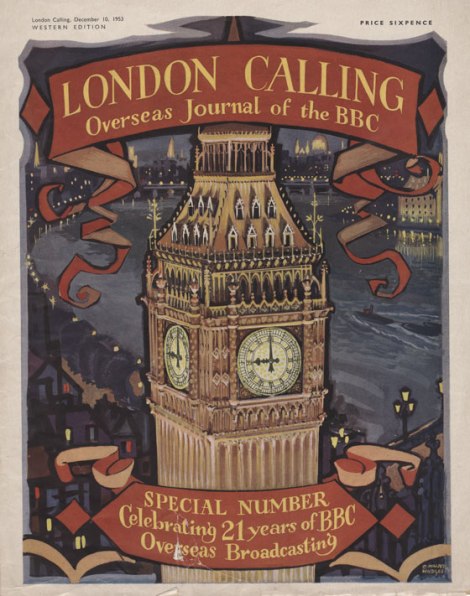 London Calling (later renamed BBC Worldwide, then BBC On Air) was a monthly magazine that contained listings for the BBC World Service shortwave radio broadcasting service. It was originally called the Empire Programme Pamphlet (for what was then known as the BBC Empire Service) and then BBC Empire Broadcasting, before the title was changed in mid-1939 to London Calling. The title is a reference to the BBC World Service’s station identification, “this is London calling”.

The first BBC Empire Service broadcast took place on Monday, December 19, 1932 at 9:30 a.m. in London (9:00 p.m. in Wellington and 7:30 p.m. in Sydney) with W. G. M. Shewen, the first announcer for the new service, when he made the announcement for the first time: “this is London calling the Australasian zone through the British Empire Broadcasting Station at Daventry”.

The Radio Times papers of T R Warner (archive reference SC MSS 308) can be consulted in the IET Archives at Savoy Hill House, London, by appointment.

One thought on “The Radio Times Papers of T R Warner”