De iride, or the rainbow 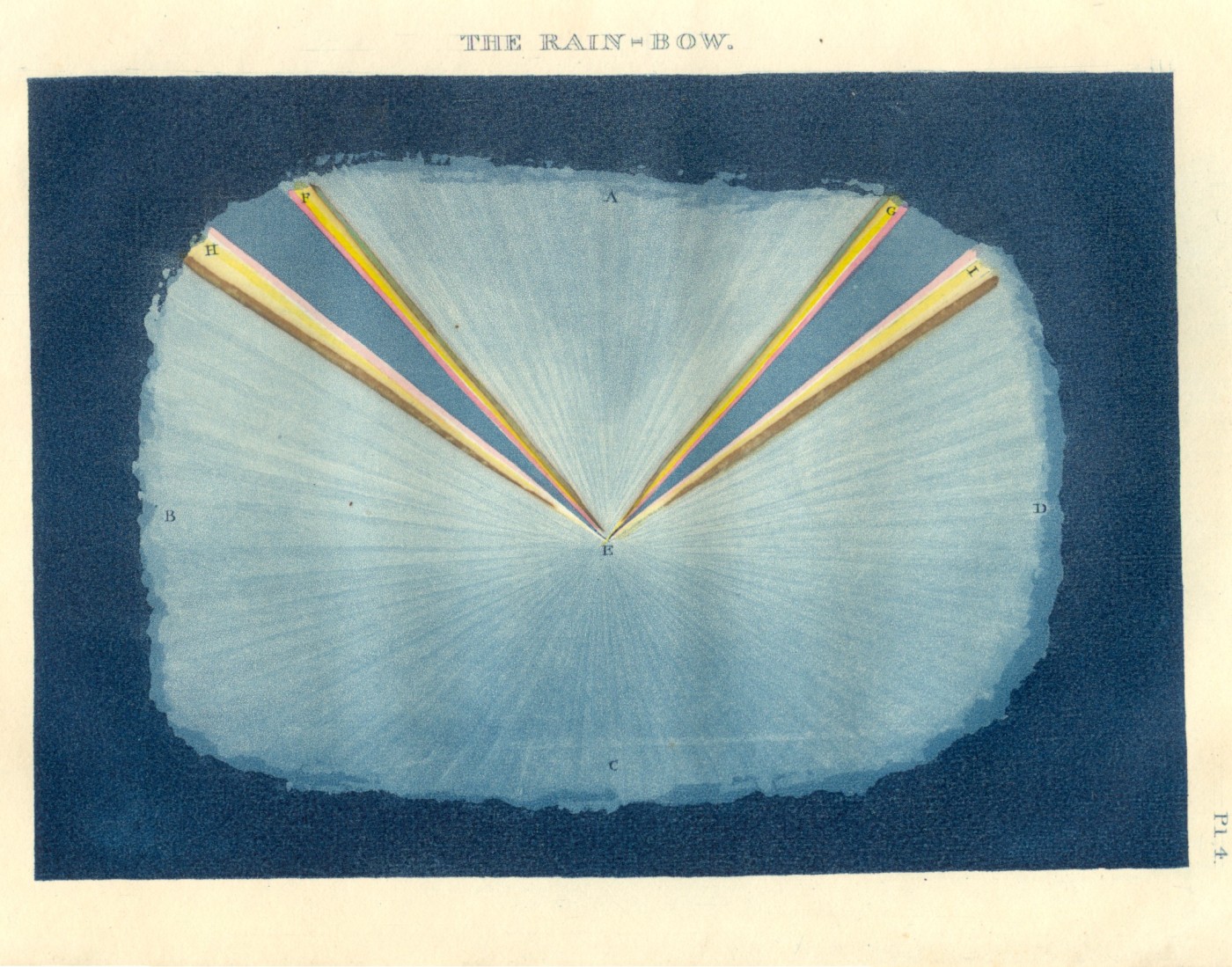 The physicist and bibliophile Silvanus P Thompson is better known for his work on electric motors and the early history of electromagnetism. His library, now held at the IET, shows his interest in all areas of physics, especially optics and acoustics. He collected many books and pamphlets on optics, notably a first edition of Newton’s Opticks, published in 1704.

An optical phenomenon which particularly interested Thomson is the rainbow, and there are several interesting and rare pamphlets in the collection on this subject.

The principle behind the spectacular show of colour in a rainbow is very similar to that of a prism.  White light enters a prism and is dispersed to show the range of colours in the visual spectrum.  These will appear in order: red through to violet.  When rain and sunlight combine, each raindrop acts as a tiny prism, dispersing the entire spectrum.

So why do we see a regular band of each colour?  When you look at a prism you can see all the colours, because it is close enough to you.  In a raindrop, the light is refracted as it enters the drop, reflected on the back of the drop and refracted again as it leaves.  Different colours exit the raindrop at different angles to the incoming white light: from 40° for violet up to 42° for red.  Each drop splits the light identically, but you see an arc of coloured bands because your eye only receives one colour from each drop.  This is due to the angle and distance between you and the rain and the position of the sun: if you can see a rainbow, the sun will be behind you. Although the raindrops are moving, because there’s enough of them you see a regular shape.

Rainbows are in fact circular, but we can’t usually see it all because of the horizon.  If you’re much higher up, on a mountain or in a plane, you may see a circular rainbow.  The moon can produce rainbows in the same way as the sun, but because its light is fainter, the rainbows are harder to see.  These are called lunar rainbows.

The pamphlets on rainbows in Thompson’s collection include the rare 18th century pamphlet above, which shows the importance of the position of the viewer. We also have the below illustration from  B Thompson on supernumerary rainbows, as seen in Market Harborough, Leicestershire. This phenomenon can be seen under certain conditions, when the raindrops are of a uniform size. There is a good explanation of supernumerary rainbows on the Atmospheric Optics website.

As well as rainbows, the Thompson pamphlet collection includes illustrations on the principles of colour, for example the spectra of different light sources above, and even the mixing of pigments in this supplement from Building World (1897):

For more information on Thompson’s pamphlet collection and the IET’s further collections on the science of optics, please contact us at archives@theiet.org. You can also read Thompson’s biography on the IET website.