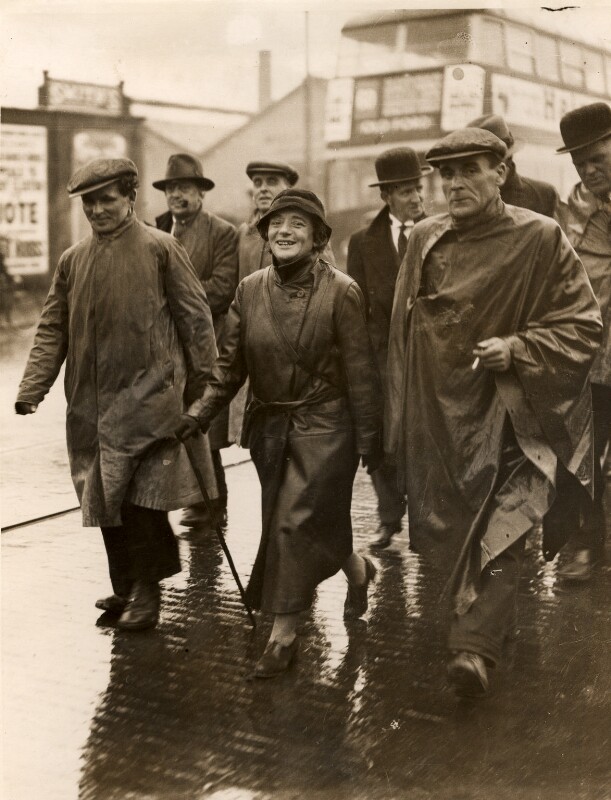 On 1 May Labour Day, or International Workers’ Day, is celebrated annually throughout the world and is a public holiday in many countries. It celebrates the achievements of workers in winning rights such as the eight hour working day, safer working conditions and weekends off work. This blog looks at the life and achievements of Ellen Wilkinson, author, politician and trade unionist, who campaigned for workers’ rights in the early 20th century, as well as her links to the Electrical Association for Women (EAW) and her enduring belief in the potential for electricity to improve the lives of working class women.

Ellen Wilkinson was born in Manchester in 1871 and was involved in politics and political activism from an early age. She studied history at Manchester University where her time spent supporting striking workers in the city led to her achieving an Upper Second Class degree rather than the First that she had been predicted. After graduating Ellen became an organiser first for the National Union of Women’s Suffrage Societies and then in 1915 a national organiser for the Amalgamated Union of Cooperative Employees. In this role she organised strikes and fought for equal pay for women and the rights of unskilled and low paid workers.

In 1920 Ellen joined the Communist Party of Great Britain (CPGB). A year later she travelled to Moscow to attend the Labour Unions Congress and the Second Congress of Communist Women. Although she admired the overthrow of the Tsar and the advances in the rights of women workers in Russia she often found herself in dispute with her fellow communists back in Manchester, and left the CPGB in 1924  by which time she had also joined the Labour Party and membership of both was forbidden. She became known as “Red Ellen” both for her flame coloured hair and her socialist politics.

In 1923 Ellen was elected to Manchester City Council. The Council had refitted several homes in Manchester to be all-electric and Ellen developed an interest in expanding electricity to working class homes, believing it would bring huge benefits to working class women and free them from a life entirely focused on work in the home. In 1925 she attended The International Conference of Women in Science, Industry and Commerce and began to attend meetings of the Manchester branch of the EAW. She addressed the EAW’s annual general meetings in 1925 and 1926. When she spoke at the EAW’s annual luncheon in 1934, The Electrical Age for Women noted:

When she was a suffrage worker, Miss Ellen Wilkinson believed that the twin keys to women’s earthly paradise were the Vote and Electricity… Miss Wilkinson is indefatigable in pressing for schemes which will enable the poorer working families to have the benefits of electric help in their homes and for education which will enable all women to make best use of the help electricity offers.

In 1937 she spoke at the annual luncheon for the Harrogate and District Branch of the EAW telling her audience that she believed cheap or free electricity was needed to alleviate the burden of domestic duties for mothers of large families from poorer backgrounds. Ellen was also interested in appliances being available in working class homes and opposed “snatch-backs” where goods, including appliances and furniture, that were almost fully paid for on credit were taken from the buyer by the hire purchase firms despite the buyer having almost completed their payments. In 1937 she successfully introduced a bill to end the “snatch-back” abuse by the hire purchase firms.

Ellen served as an MP for the Labour Party twice, firstly for Middlesbrough East from 1924 to 1931, and then for Jarrow from 1935 to 1947. During her first spell in Parliament she supported the general strike in 1926 that saw millions of people strike in support of coal miners. Ellen was concerned with the conditions that the miners worked in and brought to Parliament a piece of rope and chain that they used, to illustrate the dangerous nature of their work telling other MPs that:

As one can imagine when one sees an object like this, so filthy dirty, stiff with coal dust and perspiration, it rubs the skin until the men get callosities on their bodies and the rope presses against them, as we grow a corn on the foot, the flesh is rubbed and septic sores are the result.

When she lost her seat in the 1931 election, Ellen made a living as an author and journalist. In The Electrical Age for Women she is described as having a “direct and trenchant pen.” She had already had a novel published in 1929, Clash, a semi-autobiographical work of romantic fiction set in the context of the general strike of 1926. A year after being elected MP for Jarrow in 1935, Ellen participated in the Jarrow March to protest poverty and unemployment in the town, where around two hundred marchers made their way from Jarrow to London to deliver a petition to the House of Commons. She was also involved in international politics, visiting Spain in 1934 and 1937 to oppose fascism and raise awareness of the poverty and violence she encountered there. After World War II she served in Clement Attlee’s Labour government as Minister for Education from 1945 to 1947 and introduced free school meals and milk for those who could not afford to pay, as well as raising the school leaving age to 15 and expanding part-time adult education.

Ellen Wilkinson died in February 1947 of an accidental overdose of medication that she took for bronchial asthma. Her name and image are etched onto the plinth of the statue of Millicent Fawcett in Parliament Square and she has her own statue in Middlesbrough. Many schools as well as a building at the University of Manchester are named in honour of her pioneering work in education.